Ethiopia taps diaspora doctors to stay ahead of coronavirus 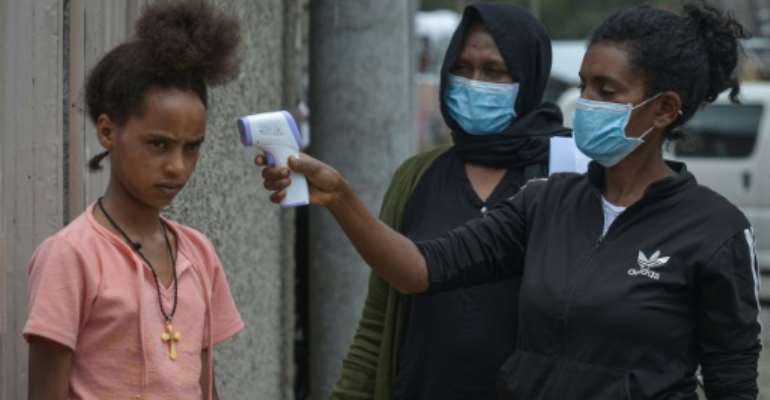 Every weekday at noon, radio host Mehret Debebe heads to his studio for a live call-in show devoted to a single topic: what the coronavirus means for Ethiopia.

The questions come from across the country, as farmers in remote regions ask how they should prepare -- and in some cases whether the virus is even real.

The answers come from even farther afield.

That's because Mehret has taken to stacking his guest list with Ethiopian doctors based abroad, often in countries like the United States that have been hit much harder by the pandemic.

"We are still in the pre-crisis phase, so I think learning from them would help a lot," Mehret, a US-trained psychiatrist, said of his diaspora guests.

"We don't know what the crisis will be like."

The World Bank says Ethiopia has just one doctor for every 10,000 people -- a ratio that's half of neighbouring Kenya's, four times lower than Nigeria's and nine times lower than South Africa's.

But the global response to the pandemic has benefited from the work of Ethiopian doctors overseas, including aides to WHO chief Tedros Adhanom Ghebreyesus -- who is himself Ethiopian, though not a doctor -- and emergency-room physicians in hotspots like New York.

Mehret's show is part of a broader effort to enlist those doctors to help shape the local response.

Just 250 cases of COVID-19, the disease caused by the coronavirus, have been confirmed so far in Ethiopia, but experts warn the health system could easily become overwhelmed by a major surge.

"Having first-hand experience from a person who is at the front, responding to the highest outbreak crisis, would give us the right kind of information" on how to prepare.

The view from New York

It was late March when Tsion Firew, an Ethiopian emergency-room doctor based in Manhattan, realised the pandemic could be as bad as anything she'd seen in her years of responding to conflicts and humanitarian disasters.

Critical patients just kept coming, and the lack of information about the virus elevated fear and anxiety.

Just 250 cases of COVID-19, the disease caused by the coronavirus, have been announced so far in Ethiopia, but experts warn the national health system could easily become overwhelmed by a major surge. By Michael Tewelde (AFP)

"I actually felt like I was back in Mosul," she recalled, referring to her time in the Iraqi city after it was liberated from the Islamic State group in 2017.

She talked about her experiences on a recent episode of Mehret's show -- a segment Mehret said helped underscore the gravity of the virus for listeners.

Tsion's time in New York, the worst-affected US city, has also informed her work on an Ethiopian government task force to fight the virus -- which she does in the mornings before hospital shifts.

When she disagrees with Ethiopian officials, like when she thought they were moving too slowly to procure testing materials, she pushes back "forcefully", she told AFP.

'Time is of the essence'

Another recent guest on Mehret's show was Dawd Siraj, an Ethiopian expert on infectious diseases at the University of Wisconsin.

He used his two appearances to break down the science behind the virus, shifting the conversation towards facts and away from what he described as "supranatural" narratives.

"The foundation of science and the methods of reaching conclusions are solid. I want to explain this to the public in an easy, understandable way," he told AFP.

Mehret said it's a welcome message in Ethiopia, a deeply religious country where many assume God will protect them from the disease, in part because there haven't been many local cases so far.

"When it comes to COVID," he said, "people really think God will take care of it because they don't see it."

Like Tsion, Dawd is a member of the health ministry's coronavirus task force.

The council's "action plan" explains how it will use "experiences learned from around the world" to help with everything from sourcing personal protective equipment to preparing for possible lockdowns should the situation in Ethiopia deteriorate.

"The key is to get ahead of the virus. Time is of the essence!!" the document reads.

Last week, Mehret aired an interview with Wondwossen G Tekle, an Ethiopian endovascular neurologist at the University of Texas who recently came down with, and recovered from, COVID-19.

Along with his symptoms -- the aches, the chills, the loss of taste and smell -- Wondwossen described the importance of prevention in keeping Ethiopia's caseload under control.

Though the total remains low, there are now dozens of cases of community spread, and officials warn that complacency could undermine containment.

Mehret said he hoped listeners gleaned from Wondwossen's story that "this thing can catch anyone, and you can recover".

But he also wants them to understand the importance of continued vigilance.

"I think COVID is giving us time because maybe COVID knows we don't have enough preparation," Mehret said.

"But if we have all this time and we have done nothing and if the epidemic happens, I think shame on us."