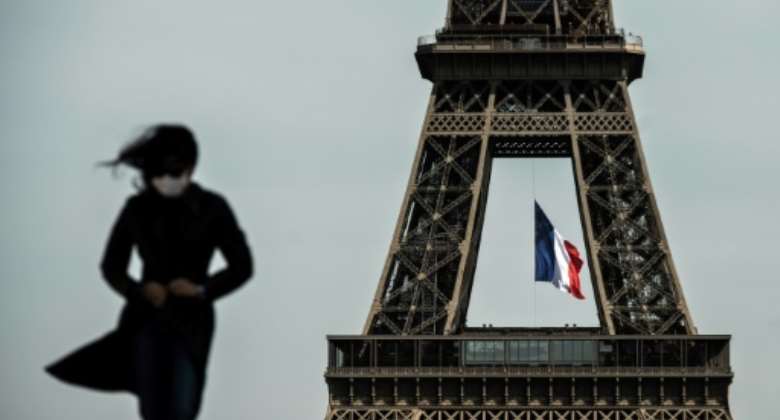 In France, people were allowed to leave the house without filling in a permit for the first time in eight weeks. By PHILIPPE LOPEZ (AFP)

Swathes of Europe as well as New York began the long process of reopening from coronavirus lockdowns on Monday, but a resurgence of infections in China and South Korea offered a sobering reminder of the dangers of a second wave of cases.

The mixed fortunes illustrate the high-wire act governments face across the globe as they try to resuscitate shattered economies while keeping in check a pandemic that has now killed more than 283,000 people and infected over 4.1 million.

As France and Spain embraced new freedoms and Britain and New York announced plans for a partial reopening, the Chinese city of Wuhan where the pandemic was born reported a second day of new cases after a month without a sign of the virus.

And neighboring South Korea announced its highest number of infections for more than a month driven by a cluster in a Seoul nightlife district.

With millions out of work and economies badly bruised, governments are desperate to hit the accelerator, but most are choosing a gradual approach as fears about a resurgence of the virus loom large.

World toll of coronavirus infections and deaths as of May 11 at 1900 GMT. By (AFP)

In parts of Europe, officials have been emboldened by promising trends, with Spain's daily fatalities falling to 123 and Italy -- once Europe's epicenter -- reporting fewer than 1,000 patients in intensive care, the lowest since March 10 before the peak of its outbreak.

France has seen its daily fatalities decline for several days but reported an uptick on Monday with 263, as it began to dismantle a military field hospital set up to take intensive care patients when hospitals were being inundated.

Confirmed deaths rose past 80,000 in the United States, far higher than any other country, according to Johns Hopkins University.

The worst-hit area in the United States is its most crowded, New York City, where a new study by the Centers for Disease Control and Prevention said that the death toll could have been underreported by the thousands.

With the worst now appearing behind, New York state gave the go-ahead Monday to start a gradual reopening this week -- although not in the city, which will remain closed at least until June.

"We start a new chapter today," Governor Andrew Cuomo told reporters, adding, "It's an exciting new phase, we're all anxious to get back to work."

The French were able to venture outdoors without filling in a permit for the first time in nearly eight weeks on Monday, and some shops reopened their doors.

The wide boulevards of the Champs-Elysees in Paris were once again back to life with cars and shoppers waiting patiently to make purchases, but things were not as before.

Police swarmed in to break up picnickers who defied guidelines to gather together without masks.

"It's a little unreal, everyone is wearing masks, it's really strange," said a young woman named Irina, queuing outside a cosmetics store.

Many Spaniards revelled in being able to visit outdoor terraces and cafes again after months under one of the world's toughest lockdowns, although virus hotspots such as Madrid and Barcelona remain under wraps.

"I really missed this, now you value these little pleasures," said Jesus Vazquez, a 51-year-old builder, as he enjoyed a sandwich and beer in the sunshine outside a bar in the city of Tarragona.

Shopping strips were once again populated in Greece, while in other parts of Europe from the Netherlands to Switzerland and Croatia youngsters headed back to the classroom after weeks at home.

In the Czech Republic some teens revelled in being able to go to the cinema again -- a novel outing after months of lockdown.

"We wanted to see what it's like just to go and see a film with my friends again," 16-year-old Tomas Fohler said from behind a mask, now compulsory in the country.

Germany too has set in motion the reopening of shops, eateries, schools and gyms, but Chancellor Angela Merkel refreshed warnings to stay safe after official data showed the infection rate picking up speed again.

Shoppers in Belgium eagerly waited to get back into shops. By Kenzo TRIBOUILLARD (AFP)

"It is necessary that we can have confidence that people are actually sticking to the basic guidelines, so keeping distance, covering mouth and nose, being considerate of each other," she said Monday.

In Britain, meanwhile, the government unveiled a "cautious roadmap" setting out new freedoms which included outdoor exercise and allowing construction, manufacturing and other manual workers back on the job.

Almost seven weeks after a nationwide stay-at-home order was put in place, more than 31,800 people have died in Britain -- a figure second only to the United States.

Russian President Vladimir Putin also said that stay-at-home orders will be eased for most workers this week, despite a surge of 10,000 new coronavirus cases every day.

With governments across the world trying to avoid a second wave, Asian nations that were among the first engulfed by the virus but have since brought it to heel are being keenly watched.

Russia said it was allowing some workers back on the job this week, even as cases soared. By Olga MALTSEVA (AFP)

Much of China has begun to get back to a form of normality, and on Monday Shanghai Disneyland threw open its gates following a three-month shutdown.

"We are very much looking forward to the first day of reopening," said one eager visitor named Kitty.

"We have stayed at home for around two months and got bored enough."

But enthusiasm in China was tempered by news on Sunday that one person had tested positive for the virus in Wuhan. There were five more cases on Monday.

Local health officials said the new infections were all from the same residential compound and were mostly older people.

South Korean officials ordered nightclubs and bars closed after a new cluster of at least 86 cases linked to an entertainment district in the capital -- many in gay clubs.

Shanghai Disnelyland opened its doors for the first time in three months. By Hector RETAMAL (AFP)

Officials scrambled to trace thousands of people who visited the area, but efforts were hampered with many believed to be reluctant to come forward because of the stigma surrounding homosexuality.

"If you hesitate a single day, our daily clock may stop for a month. Please contact the nearest clinic or health center right now," urged Prime Minister Chung Sye-kyun.

The new cluster prompted officials to push back the reopening of schools this week.

South Korea was once home to Asia's worst outbreak outside China but has been held up as a global example for its early aggressive testing and tracing.