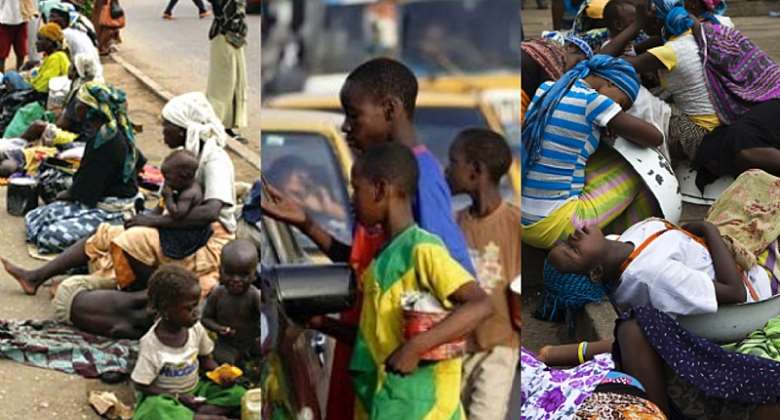 “Streetism” is a broad term used to encompass the desperate situation of children who are forced to spend most of their time outside their homes, engaging in menial income-generating activities in order to survive, and often having to sleep on streets. Street children are not found in the developing countries alone, they are found in large numbers all around the world. They usually settle in slums, asphalts, congested dilapidated areas and railway stations. The conception of street or homeless children varies from country to country and culture to culture for the reason that in national census, the population of street or homeless children is not sufficiently represented. According to Shukla (2005), the number of street children stays somewhere between 10 to 100 million in the world. There are about 40 million street children in Latin America, 25 to 30 million in Asia and more than 10 million in the continent of Africa. Nearly 80 percent of these children are males. Street children are children from whom the central reference point is the streets, one which plays a significant role in his/her everyday life and identity. (UN Human Rights report, 2011). Street children are of various categories, there are those who work on the streets as their only means of getting money, those who take refuge on the streets during the day time but return to some form of family and those who live there permanently without a family network. According to the IQSR Journal of Research and Methods in Education, 2014, street children are usually the victims of poverty, lost or social mission values and domestic violence, either or both physical and mental violence. Children turn into street children when they find no better place than to live on the streets. They come to the streets out of despair and desperation. Poverty is the main cause of bringing these children to streets as they lack basic necessities of life like food, clothing, shelter and health facilities (Shukla 2005). It is a pity that socio-economic issues are causing an uneven increase in the population of street children worldwide thus supporting the growth of different evils in the society (Scheper-Hughes, 2004). The subject of street children is recognized by the global community. On account of the adverse consequences of the children remaining street children, the United Nations expressed its concern over the issue two decades ago in 1994. For the sake of conducting an organized research so as to resolve the problems concerning the street children, an official model was designed for the rehabilitation of the street children all over the world.

The Catholic Action for Street Children (CAS) (2002) estimates, the number of street children in Accra in 2002 was 19,196 compared to 33,000 estimates by the Ministry of Manpower and Employment within the same period, as cited in Hatloy and Huser (2005).According to the social welfare department in 2014 a total of 61,492 children in Accra are victims of streetism. The causes of the menace can be attributed to poverty, peer pressure, false perception of city life and unreasonable parenting. In Accra, the reasons why girls were on the streets within the same period were similar to the findings in Kumasi. Some of the reasons outlined for girls being on the streets include: to work for money for various purposes (78.58 %), escape from forced marriage (3.57%), neglect at home (7.14%), getting pregnant (0.89%), escape from dysfunctional families (5.36%) and to gain experience outside home (4.46%) (Apt and Grieco 1997). One unpleasant observation in Ghana today is hardly a day passes without seeing children on the streets. Such children include those who have been subjected to abuse such as severe beating and starvation in their homes and have resort to finding solace on the streets. Some of them meet other children of the same fate and engage in menial jobs such as selling ice water and dog chains as a means of livelihood. The unfortunate development is fast eroding the image of Ghana as one of the safest and peaceful nations in the sub-region due to the problems associated with streetism. These children are posed to various harmful consequences like poor health, deplorable living environment, physical abuse, sexual abuse and other serious issues. Although Non Governmental Organizations (NGOs) and charity organizations do extend support for the street children, yet this is not enough. This paper work would seek to explore the subject of streetism in Ghana and its effects on the street child and the country as a whole.

Health problems are major problems of street children in Ghana. Streetism exposes the children to a lot of health hazards since they are in a non conducive environment and are vulnerable to all sorts of abuse and defilement. Sexually transmitted diseases such as HIV and AIDS, syphilis and gonorrhea become a reality in their lives. Aside that they are also at risk of being run over by vehicles and teenage pregnancy is at its highest as most of the teen girls are being forced into sexual activities. Most of the young girls are abused sexually to the highest level with the pride of their youth stolen from them. In addition to that, pregnancy related complications accompanies these innocent little girls, hence the end result of death from delivery and permanent deformations. Moreover, the successful delivery of children born to “street mothers” is a clear indication of multiplication in the number of street children all over.

In addition to that, there is the likelihood of an increase in the numbers of criminal cases in our society as a result of the increase in the numbers of children on the streets. Children born to immature mothers are most likely to turn out to be promiscuous since they lack proper parental guidance. There is therefore a possibility of an increase in armed robbery cases and more spread of sexually transmitted diseases such as HIV/AIDS as result of most of the girls engaged in prostitution as a means for survival and most of them not engaging in safe sexual activities.

Moreover, the literacy rate within the country continues to dwindle, with most of these children on the streets not getting the privilege to get enrolled in schools mainly because of the severe poverty situation of their parents. One might say in the midst of the free education why would someone not be enrolled in school? The question is not getting enrolled, but how to be able to meet up to the basic requirements of getting a basic level education, the requirements include; stationary, food and clothing to enable in smooth educational attainment of most of these children on the streets. These requirements are things the child would definitely not be able to get from his/her poor parents hence the option of not going to school at all.

In conclusion, it is so pathetic and appalling to see children all over the major streets of our dear nation, Ghana. It is so embarrassing; to have street children with tatted clothes parading the streets of the capital city of our dear country, a country we so much pride ourselves with. It is amazing how most of those who run the affairs of this country are all closing a blind eye and ear to the plight and sufferings of these little ones on our streets. It is also rather unfortunate how we all look on and never seem to extend a helping hand to these children in dire need of our help. The major irony is, these children are usually found in major cities and towns of this country, where we have majority of the well to do in these areas, yet these children have their livelihoods on the streets of this country. It is our collective responsibility to show our humanity, by extending helping hands to these vulnerable children who have no one to run to for help. It is high time we forgot about the popular quote of ‘myself and me alone’ and rather focused on the rather humane quote of ‘we and us together in this world’. We definitely have a responsibility as humans to look out for each other. Stakeholders and all responsible bodies must be up and doing in order to look out for the welfare needs of children on the streets by taking them out of the streets.

REFERENCES
Apt, N. A., & Grieco, M. (1997). Listening to Girls on the Street Tell Their Own Story: What Will Help Them Most?. Centre for Social Policy Studies, Faculty of Social Studies, University of Ghana.

Ruggie, J. (2011). Report of the special representative of the secretary-general on the issue of human rights and transnational corporations and other business enterprises: Guiding principles on business and human rights: implementing the united nations ‘protect, respect and remedy’framework. Netherlands Quarterly of Human Rights, 29(2), 224-253.