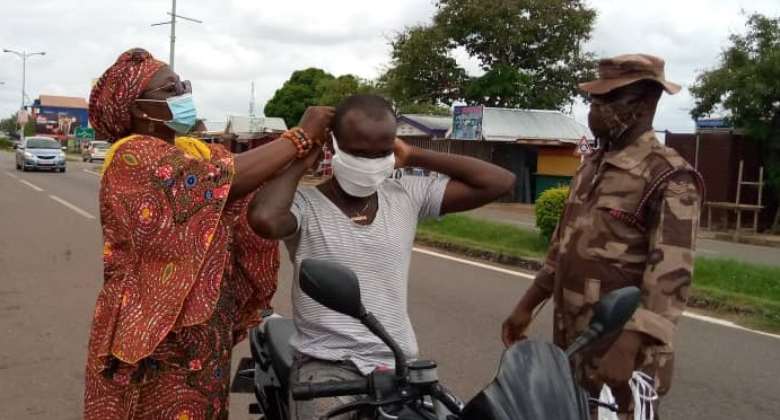 Over 2000 residents of Sunyani last Sunday benefitted from the free distribution of nose-masks by the Sunyani Municipal Assembly as part of measures to control the spread of the novel coronavirus disease in the Bono regional capital.

The exercise, which will be carried out from time to time, is to ensure that the wearing of nose-masks becomes part and parcel of residents’ everyday lives.

The Municipal Chief Executive, Justina Owusu Banahene, in the company of some health and media personnel designated as Nose-Mask Ambassadors positioned themselves at vantage points in the municipality and distributed the nose-masks to residents as they passed by.

Some of the residents who spoke to our correspondent commended the municipal assembly for prioritizing the need for people to possess and use nose-masks in the wake of the escalating figures about COVID-19 cases in the country.

“Even though we are yet to record any positive case of the disease in Sunyani, the Assembly is being proactive in its handling of the situation and I think they deserve some commendation”, Anna Ohemaa Boahemaa, one of the residents said in an interview after receiving her nose-mask.

The Sunyani Municipal Chief Executive, Justina Owusu Banahene, used the occasion to educate the residents about the proper use of nose-mask and the need to religiously observe the various safety protocols.

“The only challenge is that some people still touch their mouth and chin while wearing the nose-mask but I think with time, and as we deepen education on the proper wearing of it, the thing would change for the better”, she told journalists after the distribution.

She said Health workers are being engaged to hold series of sensitization programmes at the four satellite markets created by the Assembly to ensure that market women and buyers adhere to the various precautionary measures against the spread of Covid-19.

The vulnerable not left out

A Nose-Mask Ambassador, Seth Opoku Agyeman told our correspondent that most of the recipients of the masks were the vulnerable, taxi drivers, market women, head-potters and many others.

He expressed his satisfaction about the level of compliance regarding the wearing of the mask in Sunyani but was quick to add that “there is room for improvement.”

Deputy Lead advocate of the Mask Ambassadors, Francis Owusu-Ansah, encouraged the people not to think about the comfort but about safeguarding their health.

“We are not in normal times and we do not expect anyone to feel comfortable with the things were are doing but for the sake of our health, let’s try as much as possible to adhere to all the Covid-19 protocols”, he said.

Meanwhile, the Municipal Assembly has taken delivery of 2,000 pieces of nose-mask and bale of fabric from the central government. The fabric is currently being sewn as nose-mask by locally contracted dress-makers to increase the quantity of the PPE for subsequent distribution exercises.