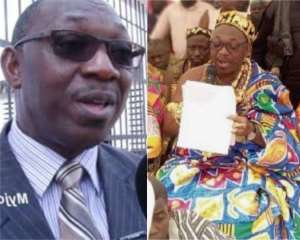 Supreme Court Judge Nominee Justice Clemence Jackson Honyenuga has said he did not endorse the presidency of Nana Akufo-Addo in his personal capacity but was a speech he was elected to read on behalf of the chiefs and people of Afadjato when the President visited the Volta region.

According to Justice Honyenuga, the state-owned Daily Graphic which reported the story misrepresented him and did not state that the endorsement was not his, but a speech he was elected to read on behalf of the chiefs.

Justice Honyenuga gave the explanation when he appeared before the vetting committee of parliament on Monday, 11 May 2020.

Justice Honyenuga who is also the Paramount Chief of the Nyagbo Traditional Area earlier this year in his welcome address to President Akufo-Addo at a durbar of chiefs and people of the Afajato South District, was full of praise for the Akufo-Addo-led administration.

“We wish to congratulate you for the excellent manner you are governing this dear country of ours, Ghana, and the significant gains made in the economy in your first term”, adding: “It is true that you have won high admiration, not only in Africa but also in advanced democracies.

“Indeed”, he added: “For special mention is the Free SHS, which has broken boundaries and has greatly bridged the gap between the rich and the poor”, observing: “This programme has also broken the record, which was held by the first President of the Republic of Ghana, Dr Kwame Nkrumah, who gave free education to our brothers and sisters in the northern part of Ghana”.

The chief continued thus: “Your Free SHS programme is unprecedented in the history of Ghana, in a first term, as it covers the whole country”.

The Daily Graphic newspaper quoted Justice Honyenuga as calling on Ghanaians to give President Akufo-Addo another term to implement his vision for the country.

“We wish to congratulate you for the excellent manner you are governing this dear country of ours; it is our hope that with your vision and the gains made in your first term, Ghanaians may consider giving you another four years,” he stated.

Justice Honyenuga was widely condemned for the endorsement taking into consideration his position as a Court of Appeal Judge who is barred from making such political endorsement per the code of their conduct.