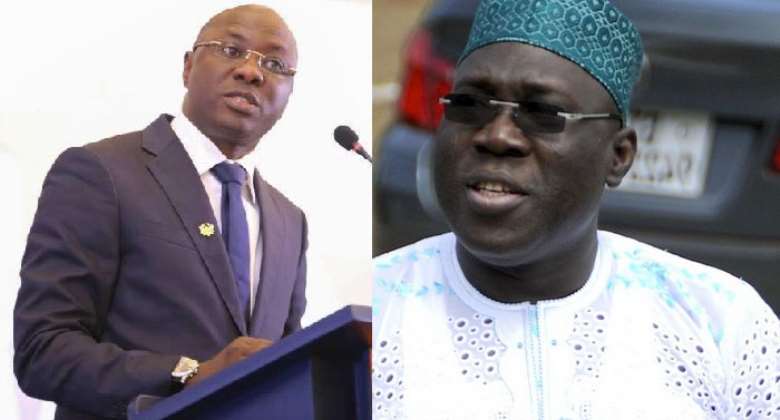 Dear brother Inusah Fuseini,
I write in response to your piece, which I understandably believe was meant for the members of your party. I also clearly assure you that I would have left the content of your piece for the consumption of your party members but for your attempt to persuade them to look down on another of our brothers, Dr. Bawumia, for his comparison of the test of leadership between President Akufo-Addo and former President Mahama during crisis response.

I have also noticed your self-denial of the efforts of President Akufo-Addo in fighting the COVID-19 by your reference to WHO protocols in your piece instead of those announced by the government of your country. I know your piece was for the eyes of your party members, but you have just registered yourself in the club of those doing partisan politics with the COVID fight, a crime you and your party have accused Dr. Bawumia of.

For your information, the comparison between the dumsor crisis and COVID-19 crisis is well placed in many respects.

I am at a loss how a well informed person like yourself will have a problem with such comparison just because one crisis relates to power shortage and the other to a disease.

What is common during crises of any form is the interest of the people we care about as political leaders.

Their interest in preserving their living conditions from becoming worse and the responsiveness of their elected leaders to alleviating their hardships, are more meaningful in the determination of effective and responsive leadership at the helm of national affairs.

Lets now examine the comparison between dumsor and COVID-19, which you and your party tried to question. Such comparison of two different crises with common effects, has well known intellectual foundations.

In comparative research setting, it is important to define the relevance of the contextual environment, whilst recognising that different contextual conditions can be used to explain a specific outcome or different outcomes.

The relevance of this comparative design is that although the dumsor crisis and COVID-19 crisis are different contexts, a comparative analysis can explain the severity of the outcomes or impacts and the impact of mitigating actions during and post crisis configuration. This is exactly what Dr. Bawumia did.

Cleary, Dr. Bawumia simply asked to know, given that both crises inflicted hardships on Ghanaians, what mitigation policies were (or are) implemented to address the hardships.

Yet your party members including you my Honourable brother would prefer to lace your understanding with propagandist allusions, and throw to the dustbin the real import of a well articulated test for accountable leadership between our two leaders – Nana Akufo-Addo and John Mahama.

On the relative responses to the two crises, I need to draw your attention that crisis response usually takes two forms – crisis-specific which targets alleviation of the crisis; and general responses intended to mitigate the unintended outcomes of the crisis.

As far as the Dumsor and COVID-19 crises are concerned, the most notable difference between President Akufo-Addo and former President John Mahama is that, the response to the Dumsor crisis was crisis specific ONLY, as the Government corruptly procured several power contracts, as we now getting to know from the civil case in the US involving the AKSA contract, the scale of corruption in approving Power Purchase Agreements, most of which we did not need.

The simple truth is that there was no single mitigating measure to save Ghanaians from the hardships of Dumsor, a self-inflicted crisis engineered to create, loot and share.

President Akufo-Addo’s approach to COVID-19 has been exemplary. Apart from implementing crisis-specific measures such as enhanced testing, isolation and treatment, a partial lockdown of Accra and Kumasi, restrictions on public gathering, and supporting front line health workers with PPEs, insurance cover and free bus ride; he is also currently implementing mitigation measures to alleviate the hardships imposed by the COVID crisis.

In fact, the social and economic mitigation measures being implemented like the free electricity for lifeline consumers, 50% electricity tariff reduction for all other customers, and free water whose most significant input cost is electricity, would have been more appreciated during the Dumsor crisis, given that the sufferings they mitigate were even more the direct consequence of the crises in the power sector at the time. Yet leadership had paralyzed and engaged only in crisis procurement of power deals.

We can also refer to the Stimulus Package of GHS 600 million for SMEs provided by president Akufo-Addo. Again, this was equally needed during the Dumsor crisis considering its devastating damage suffered by SMEs. For example, The institute of Statistical Social and Economic Research (ISSER) estimated in a study on the impact of the Dumsor crisis on 1,250 SMEs “that make over two-thirds of all jobs in the country” that the crisis lowered annual sales of a business by 37-48 percent and made the country “lose production worth $2.2 million per day or $57.2 million per month and $686.4 million annually”. Would GHS 600 million or half of this stimulus package for SMEs not have provided significant relief to those firms who were battered by the crisis?

In fact, your choice to disregard Dr. Bawumia's question to the NDC to name ONE MITIGATING MEASURE introduced during the Dumsor crisis begs the reality of an honest political discourse, as you instead filled your long piece with innuendos and inappropriate words intended to inflict pain on the hard working Vice President of our Republic. Real faux pas! Isn’t it?

Now to your mischief – Dr. Bawumia's attacks are his personal choice, not a family matter.

It is intriguing why you would want to play “the good man” role by insulating the families of Dr. Bawumia and John Mahama from what you called 'Bawumia's attacks”, but at the same time tried to impugn wrong doing on the part of Dr. Bawumia who simply has lightened up the political space with decent intellectual engagement founded on data and facts. That is really impressive dear brother, but tokenism. Is it not your party, the NDC, that has sought to perpetuate this narrative as the basis for the “attacks” on John Mahama’ since Manasseh published his Book? Some of you think and it is pathetic that Dr. Bawumia cannot criticize the former President, except because their fathers had issues. Warped theory! In fact the fact is that their two fathers remained good friends to the extent that Alhaji Mumuni Bawumia was E.A . Mahama''a first lawyer during the famous Mencilo case in the 1970s. If they had an issue between them E.A. Mahama would not have hired Alhaji Bawumia in the first place. In fact, contrary to latter day speculation, there was no problem between them. In addition, Dr. Bawumia's elder brother Dauda Bawumia supported John Mahama in the 2008 and 2012 elections and was subsequently appointed as ambassador to Burkina Faso. So it cannot be the case that there is a problem between the two families.

Fact is, former President Mahama has ruled our country in our very recent past, as Vice president and then as President, and every Ghanaian has right to question or criticize him about his stewardship (you may call that attacks), just as Ghanaians including the former president are constantly demanding accountability of President Akufo-Addo and Dr. Bawumia. This is the democratic culture we have accepted to live with. It cannot be normal when you criticize Dr. Bawumia, the Vice President, as you just did in your piece, but becomes abnormal when Dr. Bawumia criticizes former president Mahama. If that is the NDC’s logic, let it be with you.

I cannot speak for the fathers of the two political leaders, but I firmly believe it was for both of them an honour to have served their country; and if they were alive, they would find it equally honourable that their sons continue to play relevant roles in the affairs of our country. To attempt to draw them into a civil political competition of the present day is not only unpatriotic but irresponsible. The game is to show respect for and tolerance of divergent views, and we dare not substitute them for jungle democracy of the “Animal Farm” in which “Four legs good, Two legs bad”.

And yes, in about 6 months time, the good people of Ghana whose intellegence and wisdom you insulted in your piece and blaming them for what you called a “mistake” for voting overwhelmingly for President Akufo-Addo and the NPP, will once again punish your party with a clear rejection of your jaundiced record of 8-year misrule of our country.

Latest Photo Reports
Catch up with all the political quotes from our politicians.
Advertise here
More Opinion
ModernGhana Links
“Where Are The Projects?” “Seeing Is Believing”
Myanmar And Bangladesh Can Benefit From Strengthening Trade And Connectivity Ties
Prepare For More Hardship In 2022 -Ghanaians Told
Power Distance And The Entitlement Mindset: The Case Of The Ghanaian Elites
Insecurity, Not Omicron Covid Variant Is Our Problem In Nigeria
Welcome budget rejection with happiness
NPP MPs Recretly Collapsed "Agyenkwa Budget"
2022 Agyenkwa Budget 'Rejected'; A Nullity or a Legality
Memory Four Years Ago In November Of The Liberian 2017 Presidential Election First Round Saga
TOP STORIES