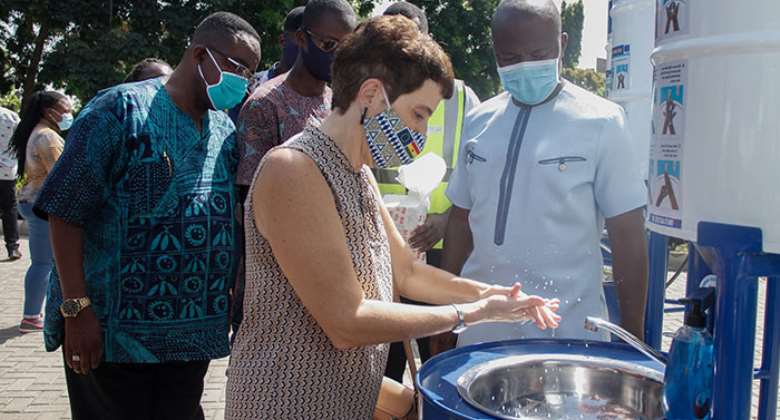 HE Diana Acconcia, EU Ambassador to Ghana, demostrates how the

The donation, according to the EU Ambassador to Ghana, Diana Acconcia, was their “tangible contribution to the fight against Covid-19.”

It also forms part of activities to mark this year's EU Day.

At a brief ceremony held at the forecourt of the AMA premises, Ambassador Acconcia stated, “With this donation, we want to prioritize the EU solidarity between the different countries of Europe, and countries outside Europe like Ghana.”

She gave an assurance that the gesture, though small, was part of a wider effort from the EU to support Ghana in this difficult moment.

“We are working with government and other partners to put together an effective response. We are looking at projects that are implemented all around Ghana to include initiatives to support communities during the Covid-19 crisis to help in the health sector, to assist the poor and to support the most vulnerable communities,” she disclosed.

She also announced that more activities would be rolled out in other regions in the coming weeks.

Receiving the items, the Mayor of Accra, Mohammed Adjei Sowah, expressed his gratitude to the EU for its kind gesture and gave an assurance that the items would be distributed fairly between the various beneficiaries.

He hinted that the items would be distributed to the Mamprobi and Kaneshie polyclinics as well as the Usher Clinic, all in Accra, so that persons who patronized those health facilities would have access to touch-free automated handwashing systems.

Besides, he assured the EU of Ghana's cooperation in projects.

The handwashing machines are produced locally, in collaboration with the Ministry of Finance and Plastic Punch, a non-governmental organization that focuses on ridding beaches of plastic and other forms of waste.