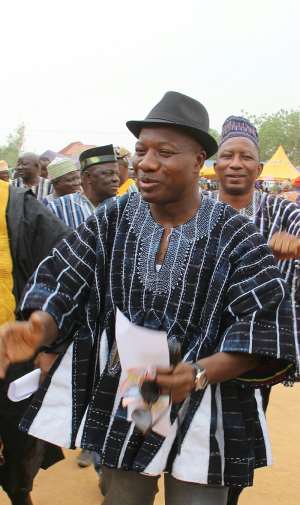 The Bawku Central Member of Parliament, Hon. Mahama Ayariga appreciates the Holy Books as sacred benefits and has secured 'Tafseer Radio Air slots' from his share of the MPs Common Fund everyday including weekends for Muslims and Christians in his constituency to propagate the word of God.

An amount of Ghc20,000:00 has been donated by the MP to foot bills of some selected radio stations in the Bawku municipality to carry out the exercise. The offer would enable religious leaders, Sheikhs, Pastors and other Islamic scholars to carry out 'Tafseer’ which is the science of explanation of the Qurān, the sacred scripture of Islam, or Qurānic commentary and the Holy Bible.

Hon Mahama Ayariga urged Muslims and Christians in his constituency to intensify the education on their program to stop the spread of the novel coronavirus.

Mr. Mohammed Mashood, the Coordinator of the airtime, speaking to Sunshine FM Journalist, James Nana Tsiquaye said, the MP's effort was in line with the President's ban on public gatherings including congregational prayers at mosques and churches since 16th March, 2020.

Mr. Mohammed said the use of the media to engaged audience or followers although has been a usual practice, more attention has been placed on the media for dissemination since the outbreak of the novel COVID- 19.

Both the Christians and Muslim leaders in the Bawku Municipality commended Mahama Ayariga for assisting them to reach out to everyone in these difficult times of covid-19 where public sensitisation is paramount to defeating the pandemic.

Mr. Mohammed said they are grateful to the MP to have seen the need to help the people of Bawku Municipality seek the face of Allah in this blessed Holy Month of Ramadan.

The Holy Month of Ramadan is the most precious in the Islamic calendar (Hijri) and it is obligatory for the Muslims to fast in the month of Ramadan. From the glorious Qur'an, the scripture reads ‘Indeed, we sent the Qur’an down during the Night of Decree. And what can make you know what is the Night of Decree? The Night of Decree is better than a thousand months. The angels and the Spirit descend therein by permission of their Lord for every matter. Peace is until the emergence of dawn’ [Quran 97:1-5].

Muslim believe the significance of the month include; Holy Quran was first revealed in the month of Ramadan, Fasting in the month of Ramadan is the fourth Pillar of Islam among the five, Fasting helps to attain Taqwa (performing of actions which please Allah and abstaining from those actions that displease Him), Ramadan is known to be the month of Quran. It is highly recommended in the Ramadan to read and study the Holy Quran and to share with others. The Night of Decree or The Night of Power (Laylat al-Qadr ) is in this month, which is better than a thousand months. In this Holy month, the gates of Paradise are opened, gates of Hell are closed and the devils are chained up, Umra’h (shorter/minor pilgrimage) in Ramadan is equivalent to Hajj (major pilgrimage).

Muslims observe I’tikaaf (residing in the mosque for worship) in the Ramadan especially in the last 10 days of this Holy month. It is a very rewarding act in Ramadan to offer Iftaar (sunset meal to breakfast) to those who are fasting and highly recommended to give Zakat (obligatory tax/donation – 2.5% of wealth/savings/assets) and Sadaqah (voluntary charity) in the Ramadaan. It is said in an authentic Hadith of Prophet Muhammad (peace be upon him) that fasting in the Ramadan sincerely out of faith and in the hope of reward, we will be forgiven all our previous sins, provided the major sins are not committed.