'Ambiguities' in offer to Iran 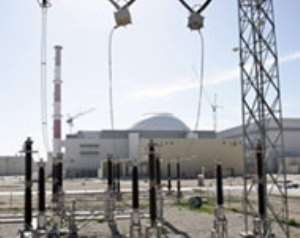 The proposals are intended to persuade Iran to curb a nuclear programme that the West fears will lead to an atomic bomb. They were agreed upon by the United States, Russia, China, Britain, France and Germany.

After receiving the incentives, the chief nuclear negotiator, Ali Larijani, said: "The proposals had some positive steps in them and some ambiguities which should be removed.

"We hope, after we study the proposal in detail, we will have another round of talks and negotiations to achieve a balanced and logical conclusion."

The six-power incentive was given to Larijani, secretary of the Supreme National Security Council, by Javier Solana, the European Union foreign policy chief.

Solana, speaking to reporters briefly before he left for Iran late on Monday, said: "The proposal we bring along, the one that we carry, we think that will allow us to get engaged in that negotiation based on trust and respect and confidence."

Iran has said it will consider the proposals, but officials have also said Iran will not give up uranium enrichment, a process that can be used to make fuel for nuclear power stations or, if enriched to a high enough level, material for bombs.

Manouchehr Mottaki, the foreign minister, said shortly before Solana arrived: "If their aim is not politicising the issue, and if they consider our demand, we can reach a logical agreement with them."

The United States has said Iran's negative comments so far are probably part of efforts to stake out a negotiating position, and urged careful consideration by the Islamic Republic, with which it broke off diplomatic ties in 1980.

Mottaki said discussions on the package would require "shuttle diplomacy" and Iran would have suggestions to make - indicating no imminent breakthrough.

"After receiving this proposal, Iranian officials will start to review this proposal and we will give our answer at an appropriate time," he said.

Details of the proposals have not been announced, but diplomats have been working on themes ranging from offering nuclear reactor technology to giving security guarantees.

The New York Times reported that incentives included a proposal to allow Tehran to purchase aircraft parts from Boeing Company and Airbus, and to buy agricultural technology from the United States, which has trade sanctions on Iran.

Diplomats in Washington said an arms embargo against Iran was among the possible penalties if it rejected the offer.

But they said the six powers had pledged to keep details secret until the package was shown to Iran so Tehran did not feel compelled to reject any or all of the elements as a face-saving gesture if they were made public first.

The nuclear dispute has unsettled oil markets, where traders fear an escalation could disrupt supplies from the world's fourth-largest oil exporter.

The stand-off has helped to keep oil prices near record levels above $70 a barrel.