Obafemi Awolowo: ... And The Man Passed On 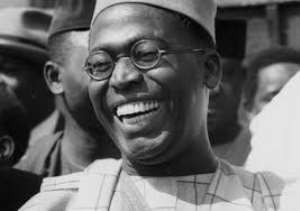 "Any man's death diminishes me, because I am involved in mankind, and therefore never send to know for whom the bell tolls; it tolls for thee." ~ John Donne, Meditation XVII

"We all want to become more than we are, we want to live forever, that is why we hate death and create the afterlife." - Bangambiki Habyarimans, Pearls of Eternity

Mrs. Folowosele, Daddy's office secretary walked into the open office where I had my desk along with others, as an Assistant Export Manager of Lawrence Omole & Sons Limited, and told me Daddy wanted to see me. Yes, we all call him Daddy, fondly. Pa (Dr.) Lawrence Omole, "àpáàrà Òkèshà tíí pa'mo n'ípa àfojúdi," was our employer and father. It was not difficult to call him Daddy because of the way and manner he treated us all. In my case, he left a job open to and for me for six months, until I made up my mind I wanted it. Only a father would do that for a son.

This was on May 8, 1987 at around 1645hrs. I scurried out of my seat and went to see Daddy in his spacious office. He told me not to leave for home and that I should wait behind. "Yes sir," I instinctively responded. It was the first time this would happen. I didn't know what to think of this kind of development. I thought I was in trouble of some sort. But what kind of trouble? I didn't know. I was nervous. Unsettled. But with a calm mien, I waited for him in his ante office.

Daddy walked out of his office at exactly 1715hrs. He told me to come with him. I walked gingerly behind him, my hands respectfully folded behind my back, measuring my steps. His Agbádá, flowing with restraint, was resplendent, staying appropriately in its place like a sentry at his post, imbuing him with evident royalty and beauty that pronounced his handsomeness. As we finished descending the stairs, his hands, folded behind him, he walked in his usual majestic pace, intermittently glancing around the complex and on the ground he was walking.

As I walked behind him, my mind's continuous turmoil was conspicuously absent from my face. I wondered if there was something I was expected to do and had left undone. I could not figure out what was going on. I brought myself into the consciousness of the moment, doing my best to pay attention and stay at alert. It was a compulsory requisite every time one is in Daddy's presence. Failure to be on top of one's game, could get anyone in trouble. It forces one to be prepared at all times. But on this occasion, I didn't think I was.

But he put me at ease, asking a number of personal questions about my welfare. We walked into the cocoa store within the premises. At the back, he showed me something that I could never forget and which I have never disclosed to anyone. Though, he didn't tell me to keep this to myself, but the occasion was instructive enough for me to know what to do.

The experience made me feel so special in my relationship with Daddy. I felt favoured. Even, if I was his biological son, he could not have reposed more than such a confidence in me. I learnt some life lessons. After showing me what he wanted to show me and made some explanations to enhance my understanding of what I had seen, he told me to see him at the house the following day in the evening. "Yes sir," I responded.

I was at the Castle of Mercy, as Daddy's residence was and is still known by at about 1750hrs on May 9, 1987 as instructed. Daddy told me to hang around because the assignment he was going to give me was not there yet. He told me he wanted me to have a look at the manuscript of his biography and someone would soon come with it. I was surprised. I didn't expect this kind of assignment. Later I learnt he has read an opinion piece of mine published in the Nigerian Tribune that was the talk of the office. It was titled "Of Peace And Justice." I was never aware of that. I, once again, felt privileged to be considered for such a task.

It was while I was waiting for the manuscript to arrive, that Daddy informed that he received a call from Lagos that Awo had passed, a couple of hours earlier. The news did not register at first. It bounded off my consciousness like a tennis ball off the wall. Like a dew drop on a leaf, it rolled off effortlessly, leaving no impact whatsoever on the leaf. Awo died? It did not sound real. It did not occur to me that this could ever be a possibility.

Obafemi Oyeniyi Awolowo, fondly called AWO by all, was the first Premier of the Western Region in Nigeria. He was a leader much more beloved by his people. His policies as Leader of Government business witnessed a lot of pace setting achievements that have remained as hallmarks and benchmarks of meaningful leadership. He loved his people. He was loyal to them. He gave up pleasure to please them, catering to their dreams and aspirations.

When he spoke, it became law. Not because he was dictatorial, but because he commanded so much respect, love, adulation, affection and unalloyed loyalty. His people would go to war because of him. He made them proud as a race, as a people, as a Nation. He provided the compass with which to navigate the treacherous political terrain of the Nigerian quagmire. He was a philosopher king. A seminal administrator. A quintessential manager of men and resources. He was a sage. An Avatar to his people. Deep. Disciplined. Reflective. Circumspect. Compassionate. Visionary. Inspiring. He was always a calm hand to and for his people in troubled waters.

He was prolific in ideas and writing. He wrote practically on every subject under the sun. Religion. Economics. Education. Health. Agriculture. Politics and Political Science. He was a Primus inter pares authority on FEDERALISM. And many more. But the kernels of all his postulations, are ideally encapsulated in AWOISM. The core of AWOISM, the crux of its essence, the atom of AWOISM as a philosophy posits that MAN is the numerus unus amongst all factors of production and must be the focus of all social, economic and political developments.

So, when Daddy broke the news of Awo's passing, it did not seem possible that such a man could die. I didn't know what to make of the news. I was really confused. But I managed to conceal my worry about it. I couldn't afford to allow any insight into my thoughts and anxiety about the news. Yes, it didn't seem real or plausible that Awo could die. Awo was expected, in my mind, to live forever. He was expected to be the rock of ages for the Yoruba Nation. He was expected to be there at all times for us when we needed him. The idea that Awo could ever die never occurred to me. How could he die? It was an unfathomable concept to my mind.

But since I have been privileged to know Daddy, he has never been wrong. Well connected by virtue of his sustained durability in businesses, philanthropies, wisdom acquired by age, travels and experience, he was not given to any sort of frivolity, no matter how tenuous. Pa Omole's demeanour always stoic, stolid, stern and sober. His utterances, more often than not were short, crisp, pungent and deep. With all this knowledge about Daddy, there was no way I could ever have doubted what he said.

My contacts at this point in my life were limited. There was no one I could speak with about this. Even, if I had a phone of my own which I did not at this point, who could I call? No source could be more reliable and dependable than Daddy, especially with what he had volunteered on few privileged occasions about his relationship with the Great Awo. There were also folklores about Pa Lawrence Omole's foray into politics in the First Republic in Ijesa land. Some of them positive, some of them not positive. Some of them hilarious and seriously entertaining while some of them were imbued with serious life lessons with insight into the etymology of the Ijesa anthropology.

All I could depend on for added information was the newspapers. And I had to wait until the following morning to have access to them. I did not have the courage of discussing this with anyone as I ruminated over this information. My thoughts for the rest of the day and till following morning were dominated by the unfairness of the possibility that Awo could die. Something within me refused to accept the mortality of the Great Awo. I was engaged in extravagant and unrestrained imagination, a chimera undoubtedly, about the immortality of the Great Awo as a physical being. In my casuistry, I unconsciously, became an antagonist of the ephemeralness of existential reality of man's physiology.

Then, the morning came. It was true. Awo had passed. And I cried!

Death, an end to which all of us must necessarily come, is inescapable; sometimes, we all wish we could or that some of our loved ones could be spared. Despite its inevitability, death is always a detraction or, if you like, a subtraction from our humanity. In that sense, it is harrowing.

Feature Article
Powered By Modern Ghana
On Pan-Africanist: My Reply to the Naysayers
We Prefer Akufo-Addo’s Wicked God to Mahama’s Inscrutable Divine Providence
GUTA Must Be Empowered to Compete
Galamsey Now Threatens Our Cocoa Industry!
Church Registration Tips
Incorporating Ginger, And Cinnamon Into Your Daily Diet Is A Smart Move
Legalizing And Regulating Okada Verses Armed Robbery: The Context Is Not The Same — Prof. John Gatsi
Nigeria: We Can’t Breathe
Is The Road To Jubilee House Paved With Jokes?
COVID-19 Updates Live Dashboard
TOP STORIES

Mahama Installed As Development Chief Of Apesika
38 minutes ago

New Voter Roll: EC Quickly Restored My Name After I Raised A...
38 minutes ago