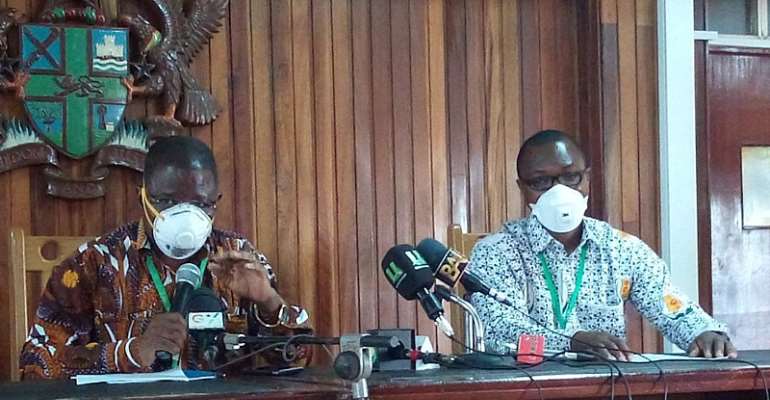 Following the first positive COVID-19 case recorded in the Bono region last Wednesday May 6, 2020, the Regional Emergency Management Committee has stepped up its contact tracing and surveillance in all the twelve districts in order to have a broader picture of the state of infection within the region and respond appropriately.

“We are no more in category four which comprises regions with no case. Now we have moved to Category Three, which is a region with one case…. Now our most immediate response which we have started is contact tracing. In the contact tracing, what we would first have to do will be contact identification and list these contacts, which we have started doing and then we do contact follow-up."

Addressing the media in Sunyani, the Regional Director of Health Services. Dr. Kofi Issah said “the Bono Region recorded its first suspected case of COVID-19 on the 9th March 2020. We have nonetheless investigated 583 suspected cases, taken 202 samples and received the results of 128 samples, one of which tested positive for COVID-19. The outstanding samples yet to be received are 74.”

“The positive case under reference is that of a 27-year-old Togolese man who illegally enter the country illegally in the company of nine others through unapproved routes in the Jaman North district capital, Sampa. He was apprehended along with the others during the last week of April 2020, by personnel of the Ghana Immigration Service.”

He said test results received on 6th May 2020 confirmed that all but one of the ten illegal immigrants was positive.

“He has since been placed in quarantine at Sampa. The remaining nine illegal immigrants have meanwhile been handed over to Immigration and National Security officials for substantive action”, he added.

“Immediately the results came in we proceeded to Sampa. The district had already started putting up some measures. Prior to this each sub-district in this country is supposed to have a team of two people as Contact Tracing Team Leads. In Bono region, we have 58 sub-districts. That means we have 116 people.”

The Regional Director further said in the Jaman North District, the sub-districts took the lead as expected with support by the district and the regional teams went in there, and had contacted 78 as at the time of the media briefing.

“These 78 people included officials of the Ghana Immigration Service, the Ghana Police Service, community people, commercial drivers who assisted in the arrest and prosecution of the ten foreigners, one of whom later tested positive…” Dr. Kofi Issah explained.

He called on the media to step up education about the disease, saying, your role as the media is very critical now….we now have to move from just describing what the signs and symptoms of COVID are to why is it unique to wash your hands, how do you wash the hands, why do you have to observe social distance” among others.