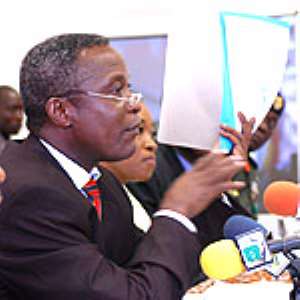 Government today said it was disappointed at the low responsiveness of Non-Bank Financial Institutions (NBFIs) to the needs of Small and Medium-Scale Enterprises (SMEs) despite the general belief that SMEs formed the bedrock of an economy.

"We appreciate why banks have a higher risk perception for SMEs and thus often shy way from administering credit to them.... Unfortunately, most NBFIs including, leasing companies, tend to behave in the same way as the banks do," Mr Kwadwo Baah-Wiredu, Finance and Economic Planning Minister said.

In a speech speech read for him at the opening of the 10th African Leasing (AfroLease) Convention in Accra, he said: "After 13 years of existence, NBFIs have not delivered the need improvement in the financial support base of Ghanaian SMEs."

According to him, only a few financial products were targeted at supporting SMEs but expressed the hope that with the passage of the Credit Reporting and National Identification Bills the situation would improve. "Much as we are disappointed in this state of affairs, we still nurse the hope that sooner than later the NBFIs including leasing companies will begin to play their rightful roles by targeting more and more of their services and products to SMEs."

Mr Baah-Wiredu said this would make leasing companies true partners in the fight against poverty and the drive for wealth creation.

The Minister said the Government over the years had shown commitment to the cause through the revision of existing legal framework for the development of such markets with the view to improving on any noted deficiencies.

He mentioned the new Banking Act under which finance leasing had become a normal banking product, the Venture Capital Fund Act and the Long Term Savings Act as some of the examples. He said the existing Finance Leasing Law and the NBFIs Law would soon be reviewed.

Mr Juma Kisaame, President of African Leasing Association (AfroLease), said the Association was committed to the cause of leasing in Africa in order to contribute to the deepening of the financial markets of economies. He said support for the growth of SMEs was crucial for AfroLease programmes but it was pertinent to tackle the issue of why leasing was still undeveloped on the Continent.

Mr Kisaame said a leasing industry could not flourish in a country and in Africa until issues of legal framework, effective regulation machinery, a conducive fiscal regime and market awareness were addressed.

He said AfroLease, in addition to urging nationals to pursue these thematic issues, was currently focussing on five key areas - increased market awareness of leasing in Africa through regional conferencing; development of rich data bank; training programmes; creating forums for networking and support for the establishment of national leasing associations.

Mr Philip Sas, an Economic Counsellor to the Swiss Government, pledged his country's commitment to assist Ghana to implement its proposed leasing programme scheduled to begin in June 2006.

He said a one million-euro support was being voted by the Swiss Government for the programme in the country and noted that leasing would provide an alternate finance mechanism for business and source of capital investment for the financing of fixed assets.

Although Ghana had a leasing law, PNDC Law 331, Mr Sas said the market was relatively immature, hence the Swiss Government's support. He said there was the need for a leased assets register to ensure transparency and the protection of the rights of leaseholders and a revision of the law on repossession of leased assets, which currently entailed court processes leading to delay and a deterioration of the value of the assets leased.

Participants from 14 African countries including Nigeria; Tanzania; Rwanda and Togo and world-leasing experts are attending the five-day convention under the auspices of AfroLease, the International Finance Corporation and the Swiss Government.

My ruling on Minority’s motion for rescission of 2022 budget...
48 minutes ago