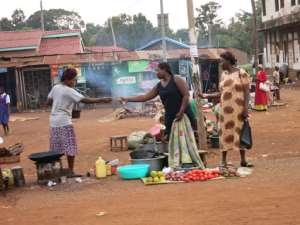 Human life in Africa is threatened more by the COVID-19 pandemic than any other continent due to the appalling living conditions for the majority of the population. During lock-down conditions, millions of Africans are faced with the choice of trying to just subsist day by day working in the informal economy to make enough money to feed one’s family or stay home and go hungry. However, the informal economy itself is part of the problem, since it no health insurance, no unemployment insurance, and income is precarious at best. The very existence of the informal economy is a malignancy that should have been eliminated decades ago, and replaced with an industrialized economy.

RFI reports that Nigeria, with over 200 million people, has 40% of its population living in life threatening poverty. According to the country’s National Bureau of Statistics (NBS), from September 2018, to October 2019, 82.9 million Nigerians earned less than 400 Naira-($1) per day. In Sub-Saharan Africa (SSA), which compromises the majority of the continent with almost 1 billion people, 41% live in extreme poverty-$1.90 per day or less. The NBS reports that poverty in Nigeria’s rural areas is more than 50 percent. The economic cruelties of life in Nigeria typify conditions throughout SSA.

Life is More Precious Than Debt
Prior to COVID-19 pandemic, African nations required a debt moratorium to save the lives of their people. As a result of the COVID-19 pandemic intersecting the existent conditions of poverty, food insecurity and lack of healthcare infrastructure, Africa leaders are demanding debt cancellation, to prioritize addressing the economic and health needs of their nations. Kenya, Senegal, South Africa, Ethiopia and Nigeria are asking for debt relief.

Following Ethiopian Prime Minister Abiy’s op-ed in the April 30 edition of the New York Times, PM Abiy wrote on May 1, that there is an “urgent need for the Global Health Pledging Conference.” In his essay, “ PM Abiy: A Pledge to Combat COVID-19 in Africa, he outlines the urgency for debt cancellation.

“Up to now, there has been a huge disconnect between the rhetoric of rich-country leaders – that this is an existential, once-in-a-century global crisis – and the support for the world’s poor and developing countries [is more] than they seem willing to contemplate. Indeed, until last week, African countries were spending more on debt payments than on health care.”

“In 34 of Sub-Saharan Africa’s 45 countries, annual per capita health spending is below $200 – and barely reaches $50 in many of these countries. Such low levels of spending make it impossible to fund acute-care hospital beds, ventilators, and the drugs needed to confront diseases like COVID-19. Paying for doctors, nurses, X-ray technicians, and other health professionals, together with their equipment, can seem almost like a luxury.”

Nigerian President Mahammadou Burhari, echoed PM Abiy’s demand for debt cancellation, in a May 4 meeting with heads of state from the Non-Aligned Movement. President Buhari “urged official lenders to help cushion the pandemic fallout with outright debt cancellation,” according Alonso Soto of Bloomberg. The article reports that, “nearly half of Nigeria’s outstanding external debt is with multilateral lenders, led by the World Bank Group with $10.1 billion. Beijing-based Export-Import Bank of China is the second-biggest creditor with loans totaling $3.2 billion, while Eurobonds account for $10.86 billion or 39% of external debt.”

Tijjani Muhammad-Bande, President of the United Nations General Assembly, discussed how the spread of the coronavirus is a threat to those already suffering from poverty and food insecurity in a May 1, op-ed by published by Food and Agricultural Organization (FAO) of the United Nations. In his statement, Preventing a Pandemic Induced Food Emergency, Ambassador Tijjani Muhammad-Bande, head of the the Nigerian Mission to the UN, wrote: “two billion people did not have regular access to safe, nutritious, and sufficient food prior to the outbreak of the Coronavirus. Indeed, hunger has been on the rise globally for the past four years

“The COVID-19 pandemic is exacerbating pre-existing inequalities, putting immense strain on tenuous systems; and plunging those in the most precarious contexts deeper into poverty and hunger.

“In many places, travel restrictions aimed at containing COVID-19 has reduced access to markets; and the purchasing power of millions of people has been decimated as a result of an exponential increase in unemployment rates. Moreover, school closures have disturbed the main source of nutrition for over 370 million children around the world.

“Those suffering from hunger are at greater risk of developing severe COVID-19 symptoms as a result of associated health conditions, such as malnutrition and non-communicable diseases, which compromise the immune system. Compounding this is the fact that those who are hungry are often trapped in poverty and do not have access to health services, water and sanitation facilities, or indeed the space to quarantine or practice social distancing.

“In both our rapid response to the pandemic, and our long-term planning, it is imperative that we link food security to health interventions and investment in infrastructure.” (emphasis added)

Lawrence Freeman is a Political-Economic Analyst for Africa, who has been involved in the economic development policy of Africa for 30 years. He is the creator of the blog: lawrencefreemanafricaandtheworld.com