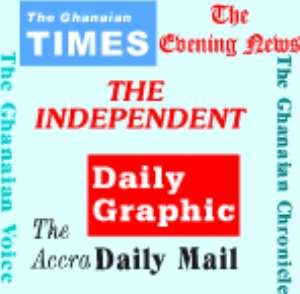 Efforts by the Controller and Accountant General's Department (CAGD) to recover money stolen from state coffers and stamp out fraud are yielding results, with the refund of ¢2.4 billion by four officials of the department who were alleged to have illegally transferred the money into their accounts.

The four, Jangay Benjamin Doku, the head of the payroll processing unit of the department and now with the Tema Municipal Assembly (TMA), Philip Seffah Kissi, the head of deposits of the final accounts unit and Peter Ntim of the Audit and investigation unit, were alleged to have illegally transferred ¢2.9 billion into their accounts.

In an interview in Accra yesterday, the Controller and Accountant General, Mr Christian Tetteh Sottie, said, “The CAGD is poised to stamp out fraud, as well as recover all moneys which have been stolen from the state”.

He pointed out that the deals of the four were uncovered after the department had undertaken a massive staff transfer exercise and a thorough check into the work of transferred staff.

The four are currently standing trial at the Greater Accra Regional Tribunal charged with various counts of conspiracy, stealing, abetment of crime and attempting to commit crime.

The spokesman of the erstwhile Armed Forces Revolutionary Council (AFRC), Major Boakye-Gyan (Retd), has staked the claim to lead an Nkrumahists platform which he calls an amalgamation of progressive forces to win the 2008 general elections.

He said with the current distressed state of the country, it was only an Nkrumahist entity, headed by a leader with vision, who could team up with like- minded people to pursue an egalitarian agenda to address the needs of the nation.

In an interview with the paper at his residence in Tema last Sunday, Major Boakye-Gyan, who said politics was about doing something good for the society, pledged to lift the country out of its present bad state.

He made it clear that he, together with some others, had developed a model which would bring all the Nkrumahist parties and individuals together to vie for positions at both the constituency and national levels without necessarily uniting the parties under one umbrella.

The Minister for Communications, Professor Mike Ocquaye, has filed a writ at the Fast Track High Court in Accra seeking punitive and exemplary damages against the editors of the Ghana Palaver and the Ghanaian Lens newspapers and their publishers for libeling him.

He is also seeking an order of perpetual injunction restraining the defendants, their servants and agents or privies from publishing any further libelous materials about him.

Prof Ocquaye, who filed the writ through his counsel, Mr Yaw Opoku-Adjaye, is also seeking the order of the court for the defendants to render a public apology in a manner acceptable to him for maliciously and or recklessly libeling him.

Also affected by the suit is Afi Amematekpor, a correspondent of the Ghanaian Lens.

The Minister for Finance and Economic Planning, Mr Kwadwo Baah-Wiredu, has stated that the Government has the resources to meet the demands of striking doctors. He, therefore, added his voice to calls on the doctors to go back to work.

In an interview in Accra yesterday, Mr Baah-Wiredu explained, however, that the payment could only be effected based on the availability of the necessary data and information required by the consultants working on the new salary structure for all public health workers.

Mr Baah-Wiredu took the opportunity to advise Ghanaian workers that in their desire to demand higher salaries and wages, all should bear in mind that there was also the need to help in revenue generation.

Referring to the 2006 budget statement, the Finance Minister said it was important that workers helped in generating the projected ¢26 trillion domestic revenue for this year, which was part of the money needed for the running of the economy.

The Volta River Authority (VRA) and the Electricity Company of Ghana (ECG) have assured consumers that adequate measures have been put in place for uninterrupted power supply during the 2006 World Cup.

They said as part of the measures, a VRA-ECG task force had been set up to work promptly to rectify any fault.

“However, in spite of these measures, we anticipate that overloading of local transformers could occur due to the likelihood of increased demand during the period of the World Cup matches, which could lead to power failures”, a joint statement issued by the VRA and ECG said.

The statement, therefore, appealed to customers to exercise restraint in such instances.

Reverend Dr Robert Aboagye-Mensah, Presiding Bishop of the Methodist Church, Ghana, has suggested the setting up of a national “Fair Wages Council” to stem the tide of labour agitations.

The council, he said, should be tasked with investigating and addressing concerns about workers' wages and salaries, he said this in a speech at the 10th anniversary celebration, of the Presbyterian/Methodist Students Union in Accra at the weekend.

He also suggested occasional direct discussions between the NLC and the presidency to give the executive first-hand information on the country's labour situation.

“It is important that in such instances intermediaries are eliminated to enable the presidency to receive only the raw and bare facts of the labour situation,” he said.

The Ketu District mutual health insurance scheme has introduced an innovative software or computer programme that enables it to issue identification cards to clients immediately they register, instead of waiting for the stipulated three to six-month period.

This has stepped up patronage of the scheme as more and more people rush to register, Raymond Avinu, the scheme manager, said at a forum at Denu in the Volta Region at the weekend.

Speaking at an outreach programme to sensitise communities on the need to register with the scheme, Mr Avinu said the increase in registration has brought in enough revenue to run the scheme.

Giving statistics, Mr Avinu said from July 2005 to the end of May 2006, a total of ¢264 million had been mobilised from 3,619 clients. Between January and the end of May, an additional ¢178 million was realised from the registration of 694 new clients.

He said he is optimistic that the target of 49,000 clients and revenue of over ¢1 billion will be achieved through prudent management practices.

A contract for the reconstruction of the City Hotel in Kumasi in the Ashanti Region was signed in Accra last Sunday between the Ghana-Libya-Arab Holding Company (GLAHCO) and the construction engineers, China State Hualong Contraction Ghana Limited.

The 14.7 million dollar reconstruction will convert the dilapidated state-owned hotel from a three-star into a four-star hotel.

GLAHCO is providing the funding for the 122-room project to be completed in 18 months. Other amenities include executive suites, guest rooms and apartments, a conference room as well as other modern hotel facilities.

The Ghana-Libya-Arab Holding Company is a joint venture investment entity in which Ghana and Libya hold 40 per cent and 60 per cent shares respectively.

The New City Hotel will be managed by Golden Tulip Hotel, also owned by GLAHCO.

On the occasion of World Environment Day, the Ministry of Local Government, Rural Development and Environment has warned about the consequences of desertification which it said threatens to claim about 35 per cent of the land area of Ghana.

Addressing a ceremony here to mark the national commemoration of the day which fell yesterday, Minister-designate for the Sector, Steven Asamoah-Boateng, said desertification and drought bring in their trail food insecurity, famine and poverty.

The major drivers of desertification in the country had been related to high rate of human population growth, high deforestation rate and inappropriate land use practices, he pointed out.

Government will require a total of ¢203.940 billion to implement the pilot phase of the “On-the-Job Training” (OJT) programme contained in the 2006 budget statement.

The programme will be carried out in two phases over a three-year period.

This was contained in a report submitted to the Minister for Finance and Economic Planning, Kwadwo Baah-Wiredu, by the nine-member technical committee set up to prepare a working paper on the modalities for implementing the programme.

The objective of the report is to provide a comprehensive review of the current situation of OJT, propose strategy and time-table for implementation, and propose incentive and grants schemes for the projects' implementation.