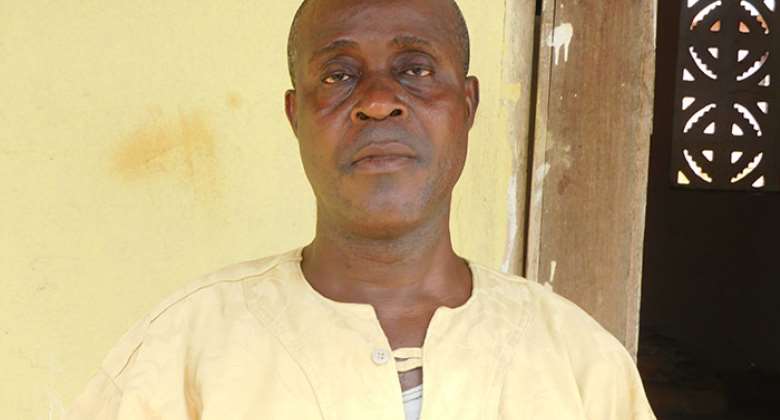 A chief in the village where the shrines of the two 'killer' fetish priests is located has admitted consulting them to acquire more money.

The Chief of Kwasi Nyarko, Barima Opoku Affi Nyarko, said he needed to raise funds to renovate his palace near Adeiso in the Upper West Akyem District of the Eastern Region, and after hearing about the money ritual activities of the fetish priests, he decided to consult them.

The two fetish priests — Christian Lawoe Gameli aka Power-One, 36, and Famous Adukonu aka Scorpion, 37, both from Afife in the Volta Region — have been operating a shrine called 'Power 1 Herbal & Spiritual Centre' located at Adu Kwadwo and Kofi Nyarko villages, near Maame Dede Junction on the Nsawam to Adeiso road.

The chief made the admission when his name popped up in a purported list which contains the names of some prominent people, including politicians, who have allegedly visited the shrine to seek spiritual protection or had been sent there by their supposed adversaries to harm them spiritually.

“I went to Power-One to help me raise some cash to renovate my palace because it was really in a bad state and needed a facelift,” he said on “Adom FM”.

He claimed he paid GH¢3,000 to the rogue priests for them to double it for him, saying “the GH¢30,000 I was promised by Power-One after the money ritual failed to materialize; it didn't work out and prior to the money ritual, he had charged me GH¢3,000 as payment for the ritual.”

He said after paying the money, he was asked to go and come back after a week and in the process the priests asked him to fill a form, but he never heard from them again.

DAILY GUIDE's investigations at Adu Kwadwo and the adjoining town, Kwasi Nyarko at Maame Krobo Junction, confirmed that 'Power One' and his accomplice moved to their present location after residents of Suhum had chased them out of the place when their nefarious activities were uncovered.

The chief confirmed that some elders of the town gave the rogue priests a piece of land for development and by the time they realized, they were doing spiritual stuff over there.

Barima Nyarko said at some point, there were complaints from residents of the area for being chased by some people when they go to the farm.

He said the complaints intensified so the chiefs in the area summoned all the fetish priests to his palace to tell them about those complaints and to find out whether they had a hand in those supposed persistent harassment.

Barima Nyarko pointed out that during the meeting there were accusations and counter accusations among the fetish priests numbering about 20 in the area.

“They, therefore, agreed to gather at the market square of Kwasi Nyarko with their deities to invoke curses on the people responsible for that,” he said, adding that they could not come back to execute their promise of invoking those curses at the market square.

“We are happy that the cover of 'Power One' has been blown, otherwise many of our people could have disappeared and we will not know who is behind it,” he said.

The chief told DAILY GUIDE that he had decided to confiscate a large tract of land bought by 'Power One' at Kwasi Nyarko and hand it over to the government for development.

According to COP Ken Yeboah, Director General of the Criminal Investigations Department (CID) of the Ghana Police Service, both fetish priests confessed to killing two people and burying them at the shrine.

During a news conference last Monday, the CID boss said the police uncovered graves that contained the remains of Edward Quartey Papafio, a biochemical consultant and Kwashie Zormelo, a mason.

A special police team raided the shrine last Thursday and retrieved an assortment of tell-tale exhibits including gallons of suspected human blood, an idol made from human skull, human bones, human hairs and beads in shallow graves.

The weapons were found in the room of 'Power One'.