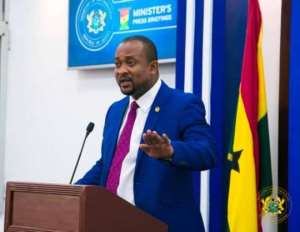 Ladies and Gentlemen of the Press, thank you for responding to our invitation at such short notice. Yesterday NDC minority in Parliament addressed the media on what it termed “worsening COVID-19 situation and the national response.” Clearly the NDC minority was merely invited to offer cover to their Flagbearer who has been badly bruised by the politicization of the COVID-19 Pandemic started by him. The misinformation, deliberate distortions and warped analysis put out by the NDC flagbearer has been bemoaned and roundly condemned by many well-meaning Ghanaians.

Just days ago, the Presidential Candidate of the NDC, Mr. John Mahama in one of his COVID-19 political broadcasts on Facebook, embarrassed himself by ignorantly questioning why the government had accessed an IMF facility, claiming that no other African country had done so – an outright fabrication from a man who occupied the high office of President a few years ago. Twenty (20) other African countries, including all the ones Mahama specifically listed, have accessed the IMF facility of $18 billion for African countries to help cushion them through the crisis. Indeed, the facility is interest-free and without the suffocating conditionalities the IMF imposed on Ghana when forced by a toxic mixture of incompetence and insensitivity, Mr. Mahama and the NDC went to the IMF for a bail out and policy credibility. It is clear that the NDC minority was only called in to do damage control.

Whiles it may ordinarily be a good thing for the NDC minority to have found their bearing and a voice several weeks after Ghana started confronting and containing the COVID-19 pandemic, it is pathetic that even upon hindsight the minority is still unable to offer any pragmatic alternatives but merely rehash those same lame queries that Mr. Mahama has asked during his political broadcasts on facebook.

Several weeks into COVID-19 and after several media engagements; both at the Presidential and other levels, it is disappointing that such deep levels of unawareness is being exhibited by the minority. It is disappointing for instance that the minority is unaware that across the various Metropolitan, Municipal and Districts Assemblies (MMDAs) public education is ongoing.

It is shocking, even embarrassing, that the NDC is still latching onto their very bogus proposal that the government should have repatriated Ghanaian students from Wuhan! The students themselves have spoken to several media outlets and shown gratitude for the much wiser decision of the Akufo-Addo government. This week, schools have in fact reopened in Wuhan! And, for the records, not a single Ghanaian student in China was infected by Covid19. And yet instead of conceding that the government exercised far superior judgement – as we always have – they keep repeating this bankrupt and expired proposal.

Ladies and gentlemen of the media, may I also report through you to the good people of Ghana that under the able leadership of President Akufo-Addo, monthly stipends for Ghanaian students studying abroad on Government Scholarship have been paid upfront and in advance. Yes, the second quarter i.e. April, May and June have already been paid. This administration inherited an accumulated arrears of one year from the NDC and Mr. Mahama.

Whiles we decline the invitation of the NDC to engage in a blind and partisan banter on COVID-19, it is also imperative that for their education, we restate some of the facts around Ghana’s very effective and successful COVID-19 Response Plan.

Very early into the global outbreak, the President of the Republic constituted a COVID-19 Task Force made up of technical persons, including Epidemiologists, Virologists, Medical Doctors, Ministry of Health and Ghana Health Service Officials, Security Heads etc. The COVID-19 task force is coordinated by a former Deputy Director General of the World Health Organization (WHO) Dr. Asamoah Baah. It is this task force of persons of reputable background knowledge, and expertise that advice H. E. the President on the policy options in fighting COVID-19 and not politicians masquerading as medical doctors in partisan COVID-19 teams.

The claim from the NDC that “Science has been relegated to the background” and “President Akufo-Addo seems more interested in his re-election than in the safety and life of Ghanaians” is false and without basis. The NDC cannot be allowed to approbate and reprobate on this matter. In one breath they claim, “The scientist at Noguchi and all other testing facilities deserves this nation’s thanks for the commitment they have shown in this national effort so far” and in another breath indict them by claiming that they misuse scientific terminologies without empirical basis. H.E. the President has led from the front and continues to address the nation honestly and regularly. Our health experts have also been enabled to offer regular updates and briefing. The claim therefore from the NDC about a certain lack of transparency is mind boggling.

President Akufo-Addo addressed the Nation and announced Ghana’s preparedness way before Ghana recorded its initial cases. The President announced an initial investment of GH¢35 million into our preparedness. This has now being ramped up to some $100 million for Ghana’s response. The claim therefore by the NDC that the Government made “no provisions for the eventuality of an outbreak in Ghana is not just unfortunate but also unfounded.

It is regrettable the minority in Ghana’s Parliament has lowered the bar on public discourse by making serious and yet unsubstantiated allegations. They claim that blatant falsehoods have been told to garnish the administration’s image without providing an iota of evidence. In asking the question couldn’t Ghana have close its borders earlier, the NDC Minority suggest that by January 20, 2020, the WHO declared COVID-19 a global health emergency. What they deliberately did not add was that the WHO recommended that there was no reason for measure that unnecessarily interfere with international travel and trade at the time. For the records, the WHO declared COVID-19 global pandemic on 11th March, 2020. Subsequently and when there was reasonably sufficient basis, Ghana’s borders were close on March 22, 2020.

For their information, the strategy objectives of Ghana’s COVID-19 Response Plan includes;

To limit and stop importation of cases, a number of steps were introduced including, Enhanced screening and surveillance at our points of entry to ensure that persons with manifested symptoms were identified and isolated. This was escalated to the issuance of a travel advisory to ban non Ghanaians and persons without Ghanaian residence permit from coming into Ghana from countries with significant recorded cases. Data from port authorities indicated that there was a drastic decline in arrival numbers. This was followed by mandatory quarantine of persons who were not affected by the ban. Ghana also closed its air, land and sea borders subsequently.

We are engaging on an aggressive tracing and testing exercise. As of today Ghana has conducted some 137,924 tests making it the Country to have tested the most per capita in Africa. This has led to the isolation of some 3,091 positive cases out of whom 303 have recovered. We have increased Ghana’s testing capacity beyond just, Noguchi and KCCR. At the moment 9 testing centres are operational across the country and others centres are being capacitated and brought on stream. The suggestion therefore that Ghana’s testing regime is problematic, is at best uneducated. The apparent sharp rise in the number of positive cases should infact indicate that the system is working at early detection and isolation and the clearing of the backlog of samples that was as a result of the enhanced contact tracing.

To slow down the spread, the Imposition of the Restrictions Act was passed by Parliament which empowered the President to close down Schools, ban social gatherings, etc. a partial lockdown was imposed on some areas of the country for a number of weeks and public education on the preventive etiquettes are ongoing across the country. Upon the President direction, wearing of face mask is mandatory in Ghana.

Recognizing the important role of frontline health personnel in fighting COVID-19, the Government has provided insurance in the sum of three hundred and fifty thousand cedis (GH¢350,000) each for some ten thousand (10,000) personnel, a tax holiday for three months has been granted to health workers and a 50% pay raise for three months has also been given to frontline personnel. PPEs continue to be provided for use by the health workers and indeed like the President continues to say, they are the Heroes and Heroines of our collective struggle.

As a responsible and responsive government, we recognized that this crises, even though is of a health nature will have a negative impact on the socio-economic life of Ghanaians. Government therefore moved to mitigate the impact on Ghanaians by the absorption of utility tariffs, provision of food to the vulnerable, stimulus packages to Micro, Small and Medium Enterprise, etc. This government has shown great sensitivity to the plight of Ghanaians and whiles at it, our can-do spirits are being awakened and leadership is being offered for persons in the pharmaceutical and fashion industries to rise to the occasion and develop our domestic capacity and deepen our self-reliance.

We have a job to do; a very important job, a grave task that’s before us and every government and people everywhere in the world. We have cause to be hopeful but, we are fully aware as should all Ghanaians, that the fight against Corona virus is far from over. There’s work our innovative scientists and technical experts are doing. Our nurses and doctors and health professionals are braving the storm. We are eternally grateful to them; their sacrifice cannot be in vain. That’s why we strive to keep our focus and encourage all Ghanaians to do so too. But it is also important not to allow the clueless NDC to try to deceive the people out of desperation for power for its own sake.

We are thankful to God that Ghana now has a mature, bold and decisive leader in the person of President Akufo-Addo, and an unquestionably and incontestably competent Vice President, Dr. Mahamudu Bawumia, to lead our country at this particular time. It is said that when God gives you a burden he gives the head pad to carry it. Yes, there’s a crisis just like the whole world is in crisis. But we trust in the good judgement of the Ghanaian people to work with the leadership of our country so that together we can defeat this virus. We are confident that with your support and God’s infinite mercies, this too shall pass.

Akufo-Addo Is The Firm, Stable, Proven And Competent Captain...
14 minutes ago