Ghana Was in the Morgue Under Little Dramani 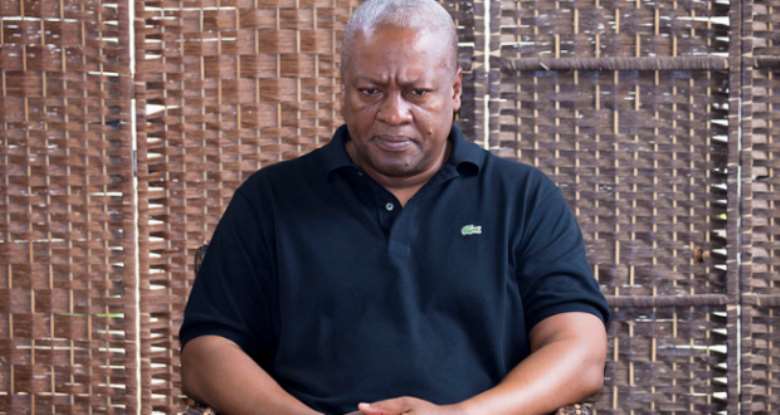 You see, the problem is not that under the watch of President Addo Dankwa Akufo-Addo and the globally raging COVID-19 Pandemic that Ghana’s economy is not under stress or “in tatters,” as former President John Dramani Mahama mockingly puts it; the real problem is one of the criminal and abject lack of leadership foresight, integrity, vision and gross exhibition of administrative incompetence on the part of the infamous kleptocratic and clueless critic. At least with Nana Akufo-Addo, we know that there is a real, mature adult and seasoned leader in charge who is honestly and diligently working for the good people of Ghana, including even a national development wrecking-ball like Little Dramani. Whereas with the latter as President, it was all about blindly and unconscionably racking up debts for the Ghanaian taxpayer and the country at large by criminally soliciting bribes left and right and nihilistically inflating the costs of contracts – from L’Affair Kanazoe to AKSA Energy scam-artistry to the European Airbus SE mega-payola racket, the list goes on and on ad infinitum (See “The Entire World Is in ICU[,] Not Only Ghana, This’s a Needle’s ‘Political Ridicule’ – Baako Tells Mahama” PeaceFM.com / Ghanaweb.com 5/7/20).

It also goes without saying that the ridicule of a clueless thievish leader is nothing of moment or significance for anybody to waste their time and energy discussing, let alone even respond to; it is like a stark-naked madman chasing discarded newspapers in the streets. Or even running for Inmates President at the Republic of Ankaful. Little Dramani has gone bonkers! At least that is the picture that I have of this Half-Finished Mess of Humanity. Indeed, anytime that this unfortunate Victim of the Presidency opens his mouth to take a characteristically cheap shot at his administrative and intellectual superiors I begin to throw up. This half-finished excuse of humanity is a prime and dangerous security risk that Ghanaians cannot afford, as Abronye DC or Kwame Baffoe recently had occasion to publicly point out. You see, under the Dumsor-inflected terror-charged tenure of Little Dramani, more prominent Ghanaian politicians crudely and savagely lost their lives than under the watch of any other Fourth-Republican leader’s watch, with the possible exception of the Dagbon Chieftaincy Crisis which, predictably a clueless Little Dramani could not resolve. Not that anybody expected this politically pimping Tamasco graduate to be able to turn an Akufo-Addo, that would be tantamount to asking the entire world of this clinical dimwit.

He is a clinical dimwit because in the global face of the overwhelming forensic evidence, Little Dramani still continues to vigorously and shamelessly defend the right of Mr. Gregory Afoko, the younger brother of Mr. Paul Awentami Afoko, the sometime National Chairman of the presently ruling New Patriotic Party (NPP), vis-à-vis the gruesome assassination of Mr. Adams Mahama, then Upper-East Regional Chairman of the New Patriotic Party, to be let off the hook. Not very long ago, for example, the former Rawlings’ Communications Minister and politically certified “Shit-Bomber” was in the news headlines vehemently arguing on behalf of the inalienable constitutional right of the prime suspect in the brutal midnight slaying of Mr. Adams Mahama to be literally given a freedom fighter’s medal and discharged from judicial custody. That is how dangerous this Indemnity Clause-protected Presidential Candidate of Ghana’s main opposition National Democratic Congress is.

Under the watch of Little Dramani and his four-and-half years of Dumsor, Ghana was literally and decidedly in the morgue/mortuary. So, it is not clear just what this clueless Woyome-Lookalike is prattling about. It also begins to make logical sense that Little Dramani would shamelessly attempt to use private investigators to undermine the moral and professional credibility and integrity of the members of the country’s judicial system, so that he could quietly get away with his contractual loots. Now, Ghanaians have also come to know the true colors of the Anas Aremeyaw Anas-owned Tiger-Eye PI Company of Mahama-underwritten sleuths. If, indeed, he were that administratively competent, as he would like his Amen-Corner supporters and the rest of the nation believe, why wasn’t Little Dramani able to significantly upgrade the caliber of the personnel and the very institution of the Ghana Police Service (GPS) during the nearly four years that he was substantive Vice-President of the Sovereign Democratic Republic of Ghana and Ex-Officio Chairman of the Ghana Police Council? It has taken the nonesuch Presidency of Nana Akufo-Addo to make the Ghana Police Service worthy of the latter’s functional designation.

Which was why I could not but unreservedly concur with Mr. Johnson Asiedu-Nketia, the General-Secretary of the National Democratic Country, when the wiry-framed, sixty-something-year-old recent graduate of the Ghana Armed Forces’ Senior-Staff College declared his party’s boss to be the Best Fourth Republican Opposition Leader. That is about the one and only job that Little Dramani may be really qualified for. You see, as the substantive President of the Sovereign Democratic Republic of Ghana, Little Dramani was a veritable wuss, a complete nuisance without compare. And now, as Ghana’s substantive Main Opposition Leader, Little Dramani is simply a joke par-excellence and an embarrassment to all visionary and progressive thinkers.