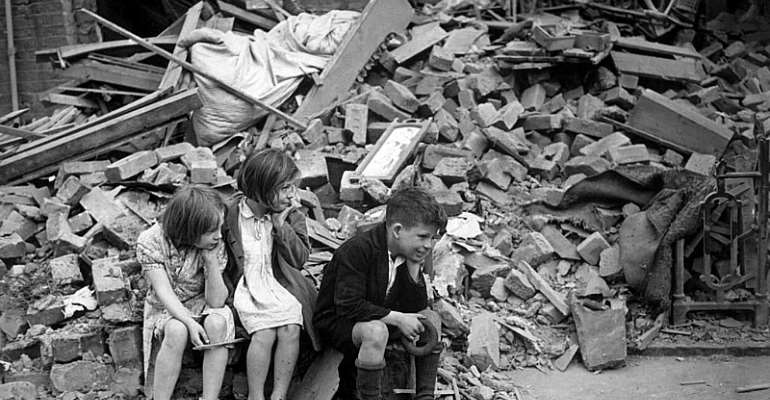 Children of the Blitz remember the events which dominated their lives 80 years ago. Joyce and Tony find the current Covid-19 lockdown eerily similar to what they experienced during WWII. Events which then brought both terror and laughter.

Joyce, 91, will go about her usual Friday chores on 8 May. She says she forgot VE Day was being celebrated. For her, it is yet another day under lockdown in Mauritius.

But 75 years ago, the Londoner was 16, laughing and dancing at the buoyant street party thrown by the Shenley Road neighbours in Camberwell, south London. Her brother, Tony, was 12, and he remembers the din.

“Everyone was so happy it was the end of the war," he recalled. "All the lights were on! Blackouts were over and we didn't have to be in the dark anymore.

“It was such a great day. It will never forget that. We took the tables out in the street. There was tea and cakes,” said Joyce.

The siblings are confined together in Joyce's spacious residence in Mauritius.

Tony was visiting from London and when the borders were suddenly closed to contain the coronavirus outbreak, his stay was prolonged. A coincidence which strangely reminds them of what they went through under the Blitz.

The German air force's  bombing campaign against Britain between 1940 and 1941 led to the evacuation of children from the big cities to the countryside and smaller towns for their protection.

More than 43,000 civilians died during the Blitz and two million houses, the majority in London, were destroyed.

“I will never forget the loud sirens. I still get a funny feeling in my stomach every time I hear that sound,” Tony said.

Joyce and Tony were evacuated from London when they were 11 and seven-years-old respectively.

During the few months that they were evacuees, they stayed with different families in various reception villages such as White Waltham, Worthing, Goring-by-Sea and Market Harborough.

The separation from their parents was hard. Especially as their mother was hospitalised for heart failure.

“I cried a lot,” Joyce told RFI. “Especially for my mum. I missed her so very much.”

A double separation for the siblings who were never “placed” in the same families. Joyce said a family in Worthing treated her like their own daughter.

Others were a bit more reticent towards evacuees and had her stay with the servants.

Tony laughs as he remembers the spinster with the big house and servants: “We used to go shopping in a Rolls Royce.”

Even though the events took place a lifetime ago, they kept a stark memory of what happened then. Like on the day they were walking in a field.

“A German plane was flying so low that we could see the pilot looking at us. But he flew on and nothing happened to us,” Joyce said.

Tony explained that as children they did not quite realise the extent of the danger they faced. The war for them also carried an element of excitement as if the events unfolding before their eyes took them into a real-life movie.

“We used to watch the dog fights - you know the German and the British planes fighting in the air,” he remembered. “We were used to pilots coming down in parachutes after their planes crashed.

“After the air raids, we would hurry out to collect the shrapnel shells. It was a big thing, all the kids were excited to get them and compare who had the biggest one.”

Joyce also remembered how parents were worried sick and urged children to stay indoors while they were on the road busy playing with friends.

“I will never, never forget the bombs falling and the landmines being dropped in parachutes,” she said. “I even saw a house disappear in front of me.”

Joyce once had a narrow escape when she was 15. She missed a bus on her way to work. While hurrying towards the next bus stop to catch it, she saw a rocket fall on the bus.

Tony and Joyce say they have noticed the same strange atmosphere in the two extraordinary periods they have experienced in their lifetime: the Blitz and the coronavirus lockdown.

“The only difference is you don't have the bombs coming down and the whole house shaking,” said Tony.

Joyce said having her brother at her side has cheered her up. "Having  little Tony here gives me extra courage," she confided.

The two agree that a solid sense of humour is the antidote to life's adversities. "When you have a good laugh, it's so much better. It's like taking vitamins,” said Joyce.