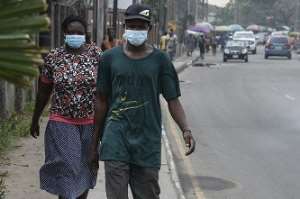 The Sunyani Municipal Assembly will, on this coming Sunday May 10, begin free distribution of nose-masks to residents in the municipality as part of measures to combat the spread of the novel coronavirus disease in the Bono regional capital.

The Assembly recently received 2,000 pieces of nose-mask from the central government plus a bale of fabric, which is being sewn as nose-mask by locally contracted dress-makers to increase the quantity of the PPE for distribution this Sunday.

The Sunyani Municipal Chief Executive, Justina Owusu Banahene, who disclosed this to modernghana.com in an exclusive interview, described as “encouraging” the rate of compliance in relation to the wearing of nose-mask in the city.

“The only challenge is that some people still touch their mouth and chin while wearing the nose-mask but I think with time, and as we deepen education on the proper wearing of it, the thing would change for the better”, she added.

Ms. Owusu Banahene further said Health workers were being engaged to hold a series of sensitization programmes at the four satellite markets created by the Assembly to ensure that market women and buyers alike stick to the various precautionary measures expected to be taken to avoid the spread of COVIS-19.

“The health officials will also throw more light on the signs and symptoms of the disease. Our Information Van would be placed at the Coronation Park to carry out the exercise after which it will move to other places”, the MCE added.

When contacted, one of the Nose-Mask Ambassadors, Dennis Kwadwo Peprah, who is also the Regional GJA Secretary, commended commercial drivers in Sunyani for wearing their nose-mask most of the time when driving.

“I think commercial drivers and transport unions ought to be commended. I’m very impressed, but education must also be intensified. I think that many people still don’t understand why they should wear the nose mask”, he said.

“Residents must ignore unnecessary theories on the disease, and try as much as possible to strictly adhere to health safety procedures. Figures on the disease are surging, and I think individual protection remains the surest remedy.”

According to him, the Mask Ambassadors are working hard to ensure that more nose-masks are acquired and distributed to people, especially “the high risk population and the needy in society.”

“That notwithstanding we plead with those who can afford to sacrifice and procure some of the mask to identifiable people in their neighborhoods or communities particularly the aged and people with disabilities who cannot afford to buy.”

A visit through some streets of Sunyani by this reporter showed that a good number of people are in their nose-masks. Notable among them are taxi drivers, shop attendants, market women and security men, especially Policemen.

It is anticipated that the free distribution of the nose-masks by the Sunyani Municipal Assembly would further encourage more residents to wear them any time they are out of their homes or come into contact with others.