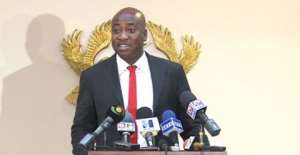 A former Deputy Minister for Trade, Murtala Mohammed under the erstwhile Mahama administration says the rolling out of the UNIPASS system at the country’s ports is disastrous.

Speaking on Eyewitness News, Murtala opined that UNIPASS is not in any way serving the purpose for which it was introduced hence, the government must not hesitate to abrogate the contract in order to resolve the unrest at the country’s ports.

“Let me say that the arrangement government has with UNIPASS whether a contract or stakeholder – and the chaos that we are witnessing at the various ports and destinations – it is very clear that this particular contractual arrangement is a disaster. If this government has some credibility, I think that they should back off because it simply doesn’t make sense to anybody,” he told Umaru Amadu Sanda on Eyewitness News.

The UNIPASS/ICUMS platform is a new port clearing system that processes documents and payments through one window: a departure from the previous system where valuation and classification and risk management and payment were handled by different entities.

CUPIA Korea, which is assisting the Customs Division to implement the UNIPASS system , has described it as an enhanced single window system for trade facilitation.

UNIPASS which is expected to address key challenges at the ports also replaces the existing service providers, the Ghana Community Network Services (GCNet), which has operated for nearly 17 years, and West Blue Consulting.

While the piloting of the system was done at the Takoradi port, UNIPASS was rolled out at the Tema port last week but was subsequently suspended following complaints from freight forwarders.

Murtala Mohammed on Eyewitness News could not fathom why the government is going ahead to engage UNIPASS despite the gains made by GCNet and West Blue arguing that the government may be doing that for its parochial interest.

“GCNet and West Blue are doing a tremendous job so why will you even think of bringing in a private entity? It means all the successes we have chalked over the years will be thrown away. The Ministry of Trade and the government should tell us what their interest is. The only interest I think is material gains. I have seen a memo in which the Minister of Finance is talking about what they have done. It is a subject for investigations. Let’s go and check if UNIPASS has the credibility to do what the government is asking them to do.”

Murtala further urged the government to “abrogate” the UNIPASS contract.

“You don’t need anybody to tell you that this UNIPASS arrangement is a disaster because of the failures we are witnessing at the port,” he added.

On Thursday, some freight forwarders in Takoradi picketed at the Customs Division of the Ghana Revenue Authority offices in Takoradi to demand the suspension of UNIPASS which they say has been problematic for their operations.

According to them, although they raised several issues with the UNIPASS throughout the training and piloting of the system a month ago in Takoradi, the problems were not addressed leading to its suspension after it was extended to Tema.

A freight forwarder who is also an importer, Henderson McCarthy, called on the government to restore GCNet to Takoradi just as it has been done in Tema until the UNIPASS challenges are fixed. Groups kick against UNIPASS

Policy think-tank, IMANI Africa, last month, petitioned government to temporarily suspend the operations of UNI-PASS and allow GCNET and West Blue to operate for the remainder of the year to rake in revenue in excess of GHS10 billion for the country, considering the impact of the COVID-19 pandemic on trade activities.

Also, the Ghana Institute of Freight Forwarders questioned the efficacy of system hours to the official outdooring of the system at the country's ports.

The Ghana Institute of Freight Forwarders has also predicted revenue losses if the concerns raised by stakeholders on the inefficiencies of the UNIPASS system are not addressed.