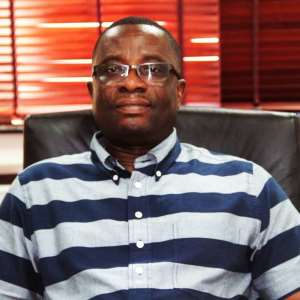 Mr Alex Adomako Mensah, Member of Parliament for Sekyere Afram plains constituency has furiously denied media reports claiming that he has confirmed the selection of Dr Kwabena Duffour as the running mate to partner the Flagbearer of the National Democratic Congress (NDC), former President John Dramani Mahama for the 2020 general election to some members of the party in his constituency.

The MP, who is a member of the Parliamentary Finance Committee, said the fake reports published by a certain ghanaspride blogging site, an unknown portal, which indicated that he had assured NDC party members of his constituency that, the National Executive Committee (NDC) of the party had settled on Dr Duffour to partner Mr Mahama is not only a figment of the writer’s imagination but also malicious, dangerous and ill-intended.

Speaking to this portal, the MP who is also a member of Food and Cocoa Affairs Committee in Parliament, said the intent of the unprofessional and poorly written news item is only aiming to cause disaffection between himself and Dr Duffour who happens to be his senior brother and called on the general to totally disregard the story.

“The story is a barefaced falsehood aimed at destroying the healthy relationship between my senior brother, Dr Duffour and myself and I am sure this is one of the devilish and wicked antics being deployed by the jumbled and desperate New Patriotic Party (NPP) in my constituency”, the furious MP alleged.

He furthered that, since the outbreak of the deadly pandemic novel coronavirus and in absolute compliance with President Akufo-Addo’s measures to curtail the spread of the virus in the country, he has never convened any meeting in the constituency with party members and therefore could not have informed them of what he has no knowledge of.

“I love my constituents and all members of my party very much and couldn’t in these abnormal times risky their lives by convening meetings with them against the President’s directive against public gathering. I have not held any meeting whatsoever not even with my constituency executives.

So where did the writer get this weird and fallacious story from if not a well-cooked story from the distressed NPP leadership in my constituency? They know very well that they cannot come closer to claiming the seat from the NDC in this constituency in the 2020 elections and therefore have deployed these wicked agenda to cause disaffection amongst us to score cheap political points but I can assure them that it will not work”, he noted

Mr Mensah, who was in 2017, attacked by some unidentified armed men on his way from Kumasi towards Kumawu said, he has no knowledge of who the running of the NDC would be adding that he is not a member of the NDC’S and could not have such valuable information as to who has been selected to partner Mr Mahama ahead of the 2020 elections.

Mr Alex Adomako Mensah also denied ever holding several meetings in the face of the deadly pandemic with his party members at the various zones and branches in the constituency and assuring them of major developmental projects that would soon hit the constituency especially when Dr Kwabena Duffour becomes the Vice President of Ghana.

“I am already doing my best in terms of helping to provide major developmental projects in the constituency. I cannot become an MP and only wait for my senior brother to become a running mate or Vice President before I discharge my duties as expected by my constituents. It doesn’t work like that. It’s only people with evil agenda who will engage in such flimsy and wicked antics”, he stated.