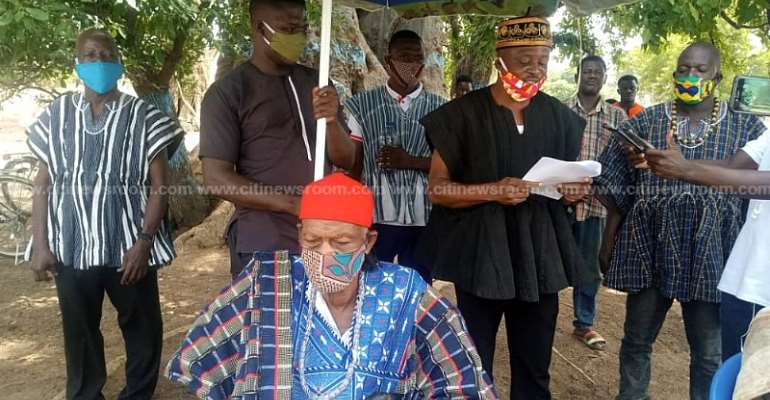 The Doba Youth Association in the Kassena-Nankana Municipal of the Upper East Region is calling on Akufo-Addo government to set up a Commission of Inquiry to investigate the impasse over the rightful traditional boundaries between the people of Doba and Kandiga.

The protracted land dispute over the rightful traditional custodian of the Azaase-Atosale and the Abempengo electoral areas between the traditional authority of Doba and Kandiga have led to violence.

On April 23, 2020, the construction of a Police post on the disputed land led to a clash between the people of Doba and Kandiga leading to the loss of lives and properties.

But speaking at a press conference at Doba, Chairman of the group, Anontara Asakiya Clement said, even though the matter was in court, a commission of inquiry into the matter could bring finality on the impasse.

“We call on government to set up a powerful commission of inquiry of serious personalities including chiefs to look into the impasse for a peaceful settlement once and for all. We want every government institution and other agencies and companies who have properties on that part of Doba land to prefix the name Doba.”

“We want the Azaase/Atosale and Amempengo electoral areas be prefixed with the name Doba and not Kandiga junction and that, both Assembly members Akapanga Clement and Stephen Avoma of Abempengo and Atosale/Azasse electoral areas respectively be called to order and made to start to attend meetings at the Doba area council where they belong and not Kandiga” he added.

Mr. Anontara assured the government of their cooperation in finding a lasting solution to the matter and called on citizens of Doba to remain resolute and united in their struggle for justice.

Mr. Anontara refuted claims contained in a press release issued by the Kandiga Youth Association led by its leader Micheal Abogro on the rightful owner of the disputed land.

“We wish to school Mr. Abogro and his group through this information to desist from advancing such falsehood and dishonest utterances against his land matters where he and his cohorts are currently 'squatting' and getting their daily bread. Rather he should ask his elders for the truth, to tell his children and uncles.”