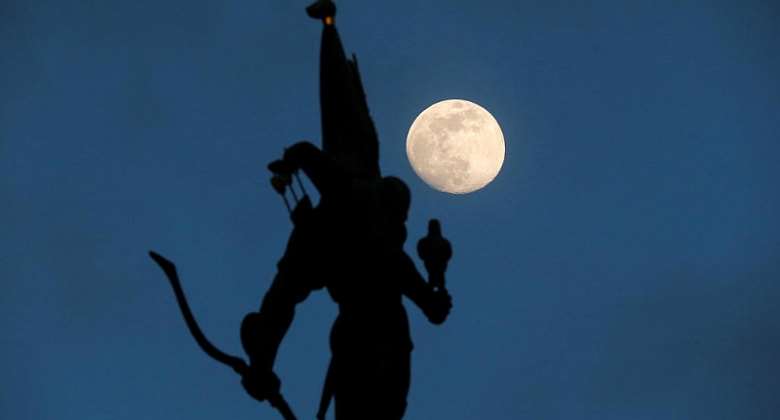 The 'Flower Super Moon', was visible early on Thursday morning and is set to rise over Europe after sunset. This is the last chance for astronomy fans to see a supermoon this year.

The term supermoon was first defined by Astrologer Richard Nolle in 1979.

Nolle explained that the phenomenon refers to a moon that occurs within 90 percent of perigee - its closest approach to Earth in a given orbit.

The supermoon appears brighter and larger than normal, and is anything from 14 percent to 30 percent brighter than the average moon.

The Maine Farmer's Almanac first published "Indian" names for the full moons in the 1930s, reports the NASA.

The Algonquin tribes called this the 'Flower Moon', in reference to the blooming of flowers in spring in the northern hemisphere.

Other names include the Corn Planting Moon and the Milk Moon.

► What is a Super Flower Moon? Watch the video below:

For Buddhists across Asia, the last supermoon of 2020 corresponds to Vesak. This holiday, also called "Buddha's Birthday," commemorates the birth, enlightenment and death of Gautama Buddha.

Latest Photo Reports
Catch up with all the political quotes from our politicians.
Advertise here
More Europe
ModernGhana Links
WK: Sword carried by Napoleon in 1799 coup goes up for auction in US
Why France and the Middle East have such a deep and lingering past
Pope accepts Paris archbishop's resignation over 'ambiguous' relationship
Dozens of rights groups demand EU blacklist on Pegasus spyware
France clinches historic €17bn deal with UAE for warplanes, helicopters
France rejects British joint border patrols to fight Channel migrant crisis
Anger and doubt over Belgian handling of Paris terrorist mastermind
France's Macron travels to the Middle East in search of major contracts
After 16 years of rule, Angela Merkel says goodbye with Nina Hagen song
TOP STORIES