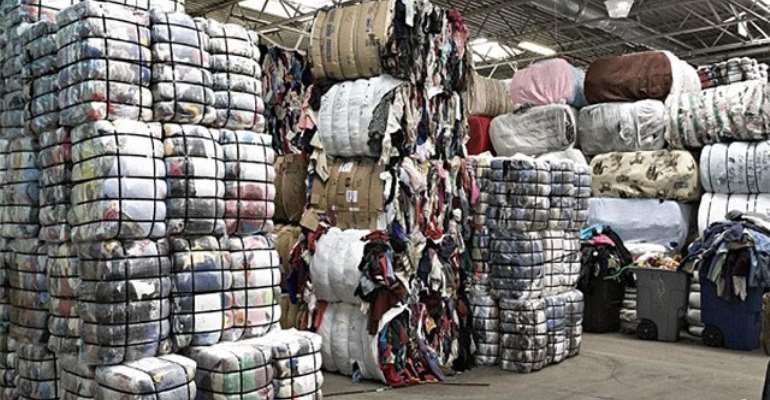 “You have enemies? Good. That means you've stood up for something in your life” - Winston Churchill

Oburoni wawu was an apposite Twi appellation for used or second-hand or worn clothing. Apposite, because of the anathema for their usage when the items began to land in this country in the late 1950s and early 1960s. Apposite because people would taunt anyone, so dirty-minded or impecunious as to patronise a dead white person's articles of clothing, and unashamedly wear them for a social function. At best, they were used for the farm. The wearer – of used shirt, trousers, shoes – would be surrounded by kids chanting: “Oburoni w'awu; ofiri adaka mu w'aba”. (The white man has died; he has resurrected from the box). Patrons of used clothing could only purchase them on the sly (secretly).

Then, somehow, it became fashionable. If one wanted to be trendy, his best bet was to go to the 'bend-down low boutiques' to purchase the worn designer item. Then, the dealers became tycoons. It is big business now, and the importers found suppliers in the U.K., U.S.A., Germany, Dubai, China. The dealers formed a group: Ghana Used Clothing Dealers Association– and they have graciously doled out a whopping GH¢300,000 to COVID-19 National Trust Fund. The amount was received from the Chairman, Boakye Yiadom, by the Chief of Staff, Akosua Frema Osei Opare, at the Jubilee House recently.

But in 1994, the government had issue a Legislative Instrument (LI 1586). The said L.I. stated unequivocally: “No person shall import for commercial purpose or in commercial quantities the following goods which are second-hand, or which have been used – handkerchiefs; men, women and children's underpants; mattresses and sanitary ware.” Penalties were prescribed for those who violated these orders. “A person who imports any goods contrary to the regulation above commits an offence and is liable on conviction to a fine not exceeding GH¢500,000 or imprisonment for a term not exceeding one year or to both, and the goods in respect of which the offence was committed shall be liable to be seized and forfeited to the state.” The L.I. 1586 of 1994 was supplanted by LI 1693 of 2001.

In those days, officers were dispatched from the National Security, Ghana Standards Board and other interested agencies, to Tema Port to check whether any bales of used clothing contained the prohibited items. Task Forces comprising officers from Customs Excise & Preventive Service, National Security, Ghana Standards Board were dispatched into the markets – to educate the sellers and buyers, and to seize those prohibited items. These L.I. 1586 and 1693 have lain on our statute books for so many years, and we are yet to see anybody prosecuted for an infringement, even though we see these items in the markets. As captured by Daily Guide editorial of Friday, May 1, 2020: “Some laws have been dormant in the statute books for so long that many Ghanaians do not even know they exist, let alone enforced… the loss of dignity associated with the use of second-hand clothing… besides the health challenges… is something which those who patronise them have hardly considered when patronising them.” Some traders would unashamedly display used handkerchiefs and used panties close to primary schools and entice the unsuspecting school children to purchase them.

The Harmonised Code (Nomenclature) puts “worn clothing and other worn articles” under H. S. 6309, and some of us think “worn clothing” is just a euphemism for dirty, discarded, misused item. We have no problem with “store-reject” which some unscrupulous importers tag as used clothing to evade custom duties. BUT we have everything against used handkerchiefs and undergarments, used towels, used mattresses. Besides attracting diseases like scabies, candidiasis, ringworm, they project us as lazy, cheap and mean people. A 2005 Oxfam research puts second-hand clothing (SHC) in sub-Saharan African countries at almost 30% by value of all imports. The research cites 'affordability' and 'durability' as some of the reasons for the patronage of second-hand clothing and 'durability'. The quality of the SHC may be higher than alternative new ones which invariably may be fake and imitated from China.

Professor Alex Dodoo, the CEO of Ghana Standards Authority, has hinted on giving the LI 1586 (1994) and LI 1693 (2001) a life-line boost. He notes: “We are triggering all the measures at the entry points to ensure that some of these items do not get to the open markets because they are unhygienic and a threat to public health.” We have to give Professor Dodoo the needed pep, especially with the pandemic Coronavirus hanging on our heads. The man means well, and he only needs our assistance and government support to act efficiently and effectively. There is no need to direct any institution on what to do in this regard. The laws are there: apply them. Prosecute offenders and teach others who now want to enter the trade to use the punishment meted to the recalcitrant traders as a guide. There are always alternative ways of earning cash to put bread on the family table.

Would it not be better to concentrate our energies on the used clothing instead of sapping them on used vehicles? So, vehicles aged above ten years are to be banned? Can a one-year old Tico or Matiz compare with a 15-year old Mercedes Benz saloon car? Or how do we compare the stability of a 10-year-old Toyota Landcruiser or Highlander with a 10-year-old Hyundai Atos or Daewoo Matiz or compare a 10-year-old Nissan Pathfinder with a 10-year-old Nissan March? Laws have been passed before, and we saw the need to amend them to reflect realities on the ground. And no more accident cars? At least, some distinction could have helped. A wealthy American may discard his Toyota Landcruiser whose bumper has been dented in an accident. Just the bumper! Would we refuse to allow such a vehicle to be imported into the country? So, if the said vehicle is imported, what do we do with it? Confiscate it to the state? Then what happens? Auction it or allocate it – to whom? We have problems with the handling of confiscated vehicles! Or do we send the vehicle to the steel works to be crushed and turned into steel? Here, we go again. There used to be a law like that Ghana. Those who care may check from the Ghana Revenue Authority (Customs Division).

We hear the ban will not only create jobs, but will also make brand new vehicles affordable for purchase – with the location of multinational automobile companies in the country. Volkswagen, Toyota, Nissan, Sinotruck and Renault have indicated their desire to establish in Ghana. The Automobile Dealers Union of Ghana (ADUG) would wish the government holds broader consultations with all stakeholders in the automobile industry. We may pray that this wish is not ignored, because somebody who matters is listening!

The American aphorist publisher (of terse, laconic memorable expressions). Elbert Hubbard, noted in 1898: “To avoid criticism, say nothing, do nothing, be nothing.” It is tempting to attribute this to Aristotle; but Marcus Tullius Cicero the Roman Statesman and Philosopher who died in 43BC sums up our attitude: “I criticise by creation, not by finding fault.”