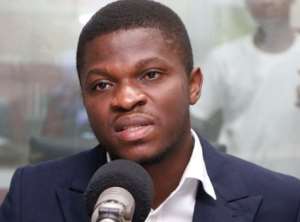 The National Democratic Congress (NDC) has announced a boycott of the morning show (Kookrokoo) of the Accra-based Peace FM as the party describe the host of the programme as a dictator over his unfair and unreasonable posture.

The party claims it is taking the action because remarks of a member of the panel, Bernard Allotey Jacobs, the immediate-past Central Regional Chairman of the party, on national issues, are against the NDC.

“The National Communication Bureau of the National Democratic Congress (NDC) wishes to inform all its communicators, media monitors, and officials that the party has boycotted Peace (104.3) FM's morning show (Kookrokoo) effective today, Wednesday, 6th May 2020,” the party's Communications Director, Sammy Gyamfi, said in a statement.

The NDC stated that all efforts to get the producers and host of the programme to replace Allotey Jacobs with a fair-minded NDC member had proved futile, indicating that “the party continues to be treated with utmost contempt.”

The opposition party indicated that the host and producers of the radio programme had “continuously foisted on the NDC” an unfair panelling system for the past eight months, by projecting Allotey Jacobs as a member of the party to take one of the two slots reserved for the NDC.

The statement pointed out that Allotey Jacobs is often introduced as a social commentator with strong leanings to the NDC “ostensibly to spite the NDC” despite consistently complaining to the management of the station for an amicable resolution of the matter.

“Specifically, the reason for this boycott has to do with the unreasonable decision of the producers and host of the programme to permanently reserve one of the two slots the party has traditionally had on Wednesdays on the show to Mr. Allotey Jacob,” the party explained further.

It said, “This unfair treatment flies in the face of the long-standing tradition of the programme, which allocates two (2) slots each to the NDC and the NPP on Wednesdays and Fridays respectively.”

Sammy Gyamfi said although the NDC acknowledged the production and editorial discretion of the radio station to give its platform to whoever it deems fit, the party considered the discretion unfair, especially when the ruling New Patriotic Party (NPP) continues to maintain its two slots on the programme on Fridays.

For the NDC, Peace FM has deliberately reduced its slots to one “to satisfy the whim of a dictatorial host and his poodle.”

“In protest to this flagrant disregard for fairness by the host and production crew of the programme, the National Communication Bureau of the NDC has decided to cease the placement of party communicators on the 'Kookrokoo' show forthwith,” the part noted.

It entreated all communicators, media monitors, members, and officials of the party to refuse any invitations and/or interviews from the 'Kookrokoo' show until the station addressed its concerns and reviewed the perceived unfair panelling system.