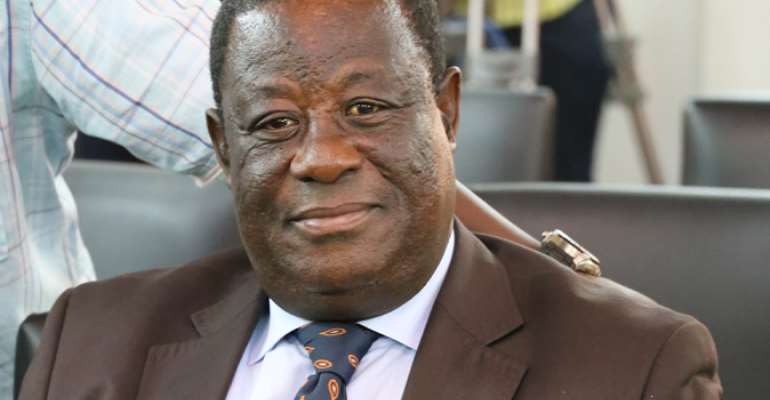 The National Democratic Congress (NDC) in the Ashanti Region has expressed dismay in some comments made by the Roads and Highways Minister, Kwesi Amoako Atta made in relation to the construction of roads in the Region.

According to them, the Minister’s statements are “outrageous and non-factual”.

Mr. Amoako Attah, speaking to the media as part of a tour to inspect ongoing road projects in the Ashanti Region, claimed that the current government had undertaken various road activities targeted at improving the road network in the region, unlike the previous NDC administration.

Talking about successes that the government had chalked in terms on road projects being undertaken in the Greater Kumasi Metropolitan Area, he noted that a total of 156 road projects are in currency and are at various stages of completion.

But the members of the opposition NDC in the region disagree with these claims, saying that the Mills-Mahama administration, if for nothing at all, made sure to improve on roads in all 18 constituencies in the Greater Kumasi Metropolitan Area.

Speaking on Eyewitness News, the Communications Officer of the NDC the Region, Abass Nurudeen, said that “the case made by the Roads Minister is quite outrageous. We could have let it pass if it had come from an ordinary NPP member but for a Roads Minister to make such baseless claims in spite of the availability of overwhelming data pointing to the contrary, we think it is a matter that requires urgent attention.”

“For the avoidance of doubt, for the past eight years that Prof Mills and John Mahama were in office, more than 400 kilometre stretch of roads were constructed in the Greater Kumasi Metropolitan Area that the Minister claimed no single kilometre of road has been constructed for the past 14 years. We find these claims outrageous and unfactual, and it’s unbecoming of a Minister. These are facts that could easily be accessed from the urban roads and highways [department].”

As part of the tour in the Region, the sector Minister also disclosed that feasibility studies have been completed to construct additional interchanges to complement the ongoing Sofoline interchange project in Kumasi.

“Traffic will reduce significantly in Kumasi and by the time we finish this road in conjunction with all the interchanges that I have already mentioned and the improvement of the road generally in Kumasi, Kumasi and Ashanti Region will be a place to visit because people will have driving comfort not only in terms of traffic being eased but you will have a smooth driving surface and you will enjoy driving in Kumasi,” the Minister promised.

The completion of this project is expected to ease vehicular traffic experienced at major intersections within the Ashanti Region.

Suame, Oforikrom, Airport Roundabout, and the Ahodwo-Santasi have been identified as areas the interchange projects will impact.

The country has a plethora of abandoned road projects, amid the already deteriorating ones and feeder road networks.

Some of these issues have to do with a lack of funds, like in the case of the Eastern Corridor.

Till recently, long stretches of the project had been abandoned, with contractors citing a lack of funds for their inability to continue with the work.

The deplorable state of roads in many parts of the country has become a challenge to many, leaving most residents who have been outraged by the poor roads to resort to series of protests to pile pressure on authorities to get their roads fixed.

But the government declared 2020, as the ‘year of roads’, promising that it will largely focus and prioritize road projects to improve infrastructure in that sector and bring an end to the cries of Ghanaians for better roads.