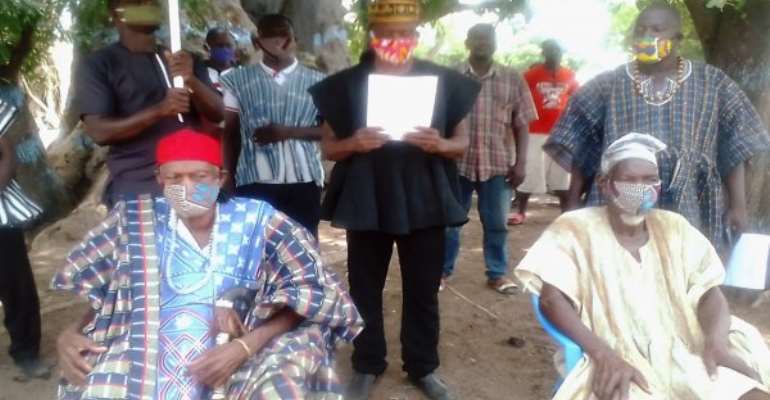 The youth who made the call at a press briefing at the Doba Chief's Palace, further appealed to government to set up a Commission of Inquiry to objectively investigate the impasse.

It would be recalled that in April, 2020, a communal conflict ensued between the two communities, when one side of the factions, the Kandiga community went ahead to dig a foundation at Akonkongo-Abempengo Electoral Area to facilitate the processes of putting up a Police post and a Community-based Health Planning and Service (CHPS) compound.

This did not go down well with the chief and people of Doba who claimed that they were the right owners of the said land, where the projects were being constructed and wondered why the Kandiga people whom they described as settlers did not inform them.

This eventually resulted in a violent conflict that led to the death of an old man and destruction of some houses and farms in the area.

Mr Clement Anontara Asakiya, the spokesperson for the youth, said the custom of the entire Region demands that for any major development project to take place in a community, the “Tindans” (custodians of land) and the chief must be consulted first.

Mr Asakiya, who is also the Chairman of the Communication Team of the Youth, said the Tindina of Doba and the Chief were not contacted before the construction started and called for the suspension of the projects until the matter was resolved to avoid further clashes.

The youth are also demanding that all structures that belonged to government and private companies, located on the parts of Doba land be prefixed with the name Doba and no other community's name.

While insisting that Government and the Electoral Commission ensured that the Azaase-Atosale and Abempengo Electoral areas were prefixed with the name Doba and not Kandiga junction, the youth group appealed to all politicians to desist from playing politics with the communal conflict since it was purely a land litigation issue.

The Spokesperson who commended the security agencies particularly the military for maintaining law and order in the area, entreated the military to be more professional in discharging their duties and desist from brutalizing some community members in their homes.