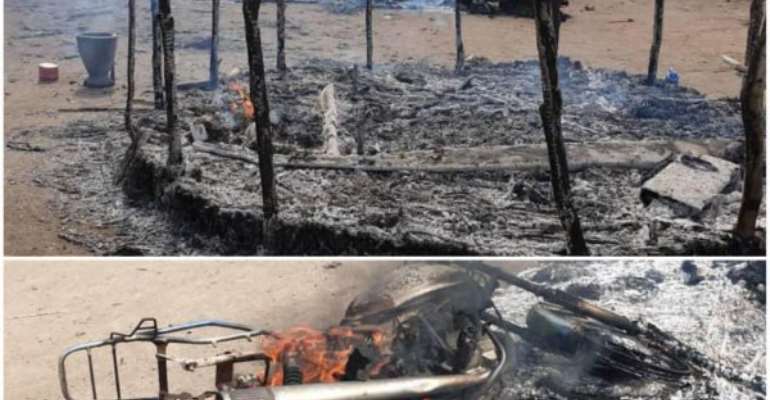 The youth besieged Kudzokope, the cottage of the complainant and set it ablaze, damaging motorbikes, dispersing herds of cattle with gunshots and causing injury.

Superintendent of Police, Mr Anthony Danso, Ho Municipal Police Commander, who confirmed the incident to the Ghana News Agency said the Police received a complaint from Mr Emmanuel Bello, a cattle ranch owner over theft of cows from his kraal, on April 29, this year, which investigation led to the arrest of the herdsman.

He said the suspect mentioned Asigbey Kudzo as the fellow who convinced him to steal the animal so the proceeds could be shared between them.

The Municipal Commander said Police then mobilised to arrest Kudzo, but the irate youth carrying offensive implements, guns and clubs succeeded in forcibly freeing the suspect in handcuffs on May 03, 2020.

He said it was after the abortive arrest that the group sieged Kudzokope and burnt down the cottage.

Mr Danso, who led the arresting team restrained his men from a possible bloodbath, but later met the traditional authority and opinion leaders, who promised to bring the culprits and the handcuff.

He said the presence of the Police as mandated by the Constitution was to maintain law and order and entreated the public not to see Policemen as enemies in any matter, but peace makers at all times.

Mr Danso said it would be in the interest of such groups to cooperate with the police or have themselves to blame.

Meanwhile, the Police has stepped up investigations into the matter.