By Alex Pigman with Femke Colborne in Berlin and AFP bureaus 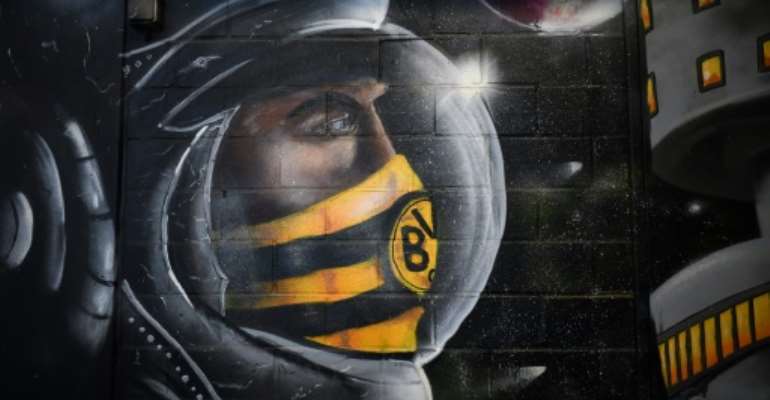 Germany unveiled plans to reopen most sectors this month, including top-tier football. By Ina FASSBENDER (AFP)

The EU on Wednesday forecast a historic recession on the continent battered by the deadly coronavirus pandemic, as the US and China escalated their war of words over the origins of the disease.

The grim prediction from Brussels came as Germany -- Europe's biggest economy -- unveiled plans for a near-return to normality, with fresh data revealing the extent of the damage done to its manufacturing sector and car sales.

Countries in Asia joined with Europe in easing the punishing lockdowns that have kept swathes of humanity indoors for weeks and pummelled economies, tipping the world toward a recession not seen in decades.

Some students in the central Chinese city of Wuhan, where the outbreak emerged late last year, were back in classrooms on Wednesday, while South Korea lept back to life with offices and museums open once again.

The pandemic has now killed more than 257,000 people globally and officially infected nearly 3.7 million, although with only the most serious cases being tested the number is believed to be far higher.

Europe accounts for the lion's share of deaths and infections, though hardest hit Britain, Italy, Spain and France have started a levelling off of new cases and fatalities.

On the economic front, the news was less optimistic.

"Europe is facing an economic shock without precedent since the Great Depression," he warned.

Governments are seeking to revive their economies by slowly lifting lockdown measures that have hemmed in more than 4.6 billion people worldwide -- while avoiding a deadly second wave of the virus.

Germany will allow all students back to school this month, all shops to resume business and even restart the top-flight football Bundesliga.

Hard-hit Italy has slowly relaxed some of its lockdown restrictions. By ANDREAS SOLARO (AFP)

In Britain, Prime Minister Boris Johnson said some lockdown measures could be scaled back from next week, though warned against moving too briskly.

"It would be an economic disaster for this country if we were to pursue a relaxation of these measures now in such a way as to trigger a second spike," said Johnson, who was himself treated in hospital for the virus.

The UK on Tuesday overtook Italy for the highest number of deaths in Europe, and is now second after the US in terms of fatalities.

France is inching towards a May 11 deadline to allow some schools to open their doors again after almost two months, while lawmakers in Spain met on Wednesday to vote on extending lockdown measures by two weeks.

Britain overtook Italy for the most deaths out of any country in Europe, and second only to the US. By ISABEL INFANTES (AFP)

The vote comes as Spain said foreign tourist arrivals plummeted by 64 percent in March, a major blow to a key economic lifeline.

Some residents were in favour of a gradual return to normal to avoid a resurgence of the disease that has paralysed the country.

"The end of confinement wouldn't be bad, but we have to go through all the phases," said Adrian, a gardener in Madrid, speaking to AFP from under a face mask.

"It's better to have a bit more patience and end it well than rushing and having after another peak or another outbreak that hits us harder."

As hopes of a quick economic recovery cooled, a war of words between China and the US heated up over the origins of the deadly coronavirus that first emerged in Wuhan last year.

China once again batted away accusations from Washington that the virus originated in a lab, accusing US politicians of peddling the theory for political gain.

"This matter should be handed to scientists and medical professionals, and not politicians who lie for their own domestic political ends," China's foreign ministry spokeswoman Hua Chunying said.

US President Donald Trump is eager to get the economy back on track. By Angela Weiss (AFP)

Her remarks come after US Secretary of State Mike Pompeo said there was "enormous evidence" the virus came from a Chinese lab, a theory also fuelled by President Donald Trump.

Scientists believe the disease originated among animals and jumped to humans -- possibly in a Wuhan wet market where wild animals were slaughtered and sold.

China's envoy to the UN said on Wednesday an investigation into the origins of the pandemic should only be carried out once the crisis is over.

"It's not that we are allergic to any kind of investigations, inquiries or evaluations," Chen Xu said.

Trump is fighting a battle on another front -- eager to get the world's biggest economy restarted as he seeks reelection on November.

"We can't keep our country closed for the next five years," he said on a trip to a mask-making factory in Arizona.

But more dire jobs news came through Wednesday: more than 20 million private positions were slashed in April in the US, payrolls firm ADP said.

Senior students were back at school in Wuhan, where the virus first emerged. By STR (AFP)

The US is by far the worst hit by the pandemic, with 71,000 deaths and 1.2 million infections -- numbers that experts predict will continue to rise.

Trump appeared to backpedal on scrapping a coronavirus task force after Vice President Mike Pence suggested it could be done away with by early June.

In a series of tweets, Trump said the task force had been so successful that it "will continue on indefinitely with its focus on SAFETY & OPENING UP OUR COUNTRY AGAIN".

The comments came as elated senior students returned to school in Wuhan after weeks indoors under one of the world's toughest lockdowns.

But there were new regulations to get used to: wearing face masks and filing passed thermal scanners, students were asked to sit at desks spaced one metre (over three feet) apart.

"This is the first time that I'm so happy to go back to school, although I have to sit a monthly examination on the 8th," posted one user on Weibo, China's Twitter-like social media platform.

Elsewhere in Asia, familiar signs of life returned in South Korea, once home to the region's second worst outbreak after China.

Workers went back to the office and museums and libraries opened again, in a country credited with controlling its outbreak with aggressive testing and tracing of cases.

In Seoul, about 100 people visited the national museum, where staffers handed out a bouquet of flowers to the first patrons.

"We are very excited about the reopening, we are very happy," museum spokeswoman Lee Hyun-ju told AFP.