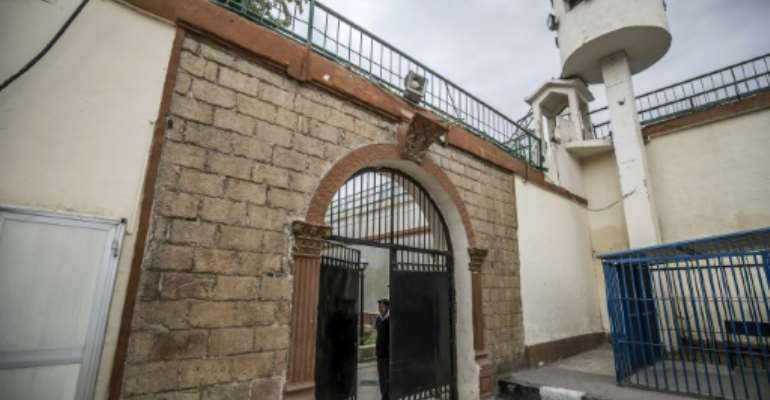 Shady Habash, 24, who died in Tora prison in Cairo, pictured, at the weekend, was imprisoned for directing a music video critical of President Abdel Fattah al-Sisi. By Khaled DESOUKI (AFP/File)

Egypt's public prosecutor said Tuesday that alcohol poisoning caused the controversial death in jail of a young music-video maker after drinking liquid sanitiser he had mistaken for water.

Shady Habash, 24, who died in Tora prison in Cairo at the weekend, was imprisoned for directing a music video critical of President Abdel Fattah al-Sisi.

"The deceased informed the physician on duty that he had drunk a quantity of alcohol at noon on the day before his death," the prosecutor said in a statement.

Alcohol-based sanitisers were distributed to inmates as a protective measure against the coronavirus pandemic, the statement added.

It quoted the physician as saying Habash mistook the bottle for one full of water and later complained of stomach cramps.

"The physician gave him antiseptic and antispasmodic drugs and had him return to his cell to stabilise his condition," the statement said.

It added that when Habash's health deteriorated, the physician decided to transfer him to a hospital outside the prison.

The doctor tried reviving him but Habash died in custody before his transfer to a hospital, according to the public prosecutor.

In their investigation, the prosecution questioned three of his cell-mates, with one saying that Habash admitted to drinking sanitisers "by accident" and that two 100 millilitre bottles of hand sanitiser had been "discarded in the rubbish bin".

Habash was detained in March 2018, accused of "spreading fake news" and "belonging to an illegal organisation", according to the prosecution.

He was arrested after having directed the music video for the song "Balaha" by rock singer Ramy Essam.

The song's lyrics lambast "Balaha" -- a name given to Sisi by his detractors in reference to a character in an Egyptian film known for being a notorious liar.

Essam gained popularity during the popular revolt against then-president Hosni Mubarak in early 2011. He has since gone into exile in Sweden.

The video has had more than 5.8 million views on YouTube.

In a rare move, lawmaker Nadia Henry, a member of Egypt's overwhelmingly pro-Sisi parliament, demanded an inquest into Habash's death on Wednesday.

She asked for answers from the prime minister, interior minister and justice minister on the young man's final hours.

"His physical and mental health worsened in the past few months against the backdrop of the exceptional measures taken because of the coronavirus," she wrote in a request addressed to the parliamentary speaker, of a which a copy was posted on her social media accounts.

Since early March, due to the virus pandemic, authorities suspended visits and the work of the courts further isolating detainees.

"We call for the release all those who are sick in jails so we don't have a repeat of this incident which harms Egypt's reputation," Henry added.

Several human rights activists also questioned the account of Habash's death in the prosecutor's statement, arguing it was tantamount to medical negligence.

Fearing the spread of the virus in overcrowded prisons, human rights defenders have consistently called for the release of political prisoners and detainees awaiting trial since the start of the pandemic.

Egypt has so far recorded over 7,000 virus infections and 450 fatalities.

An estimated 60,000 detainees in Egypt are political prisoners, according to rights groups.

These include secular activists, journalists, lawyers, academics and Islamists arrested in an ongoing crackdown against dissent since the military's 2013 ouster of Islamist president Mohamed Morsi.