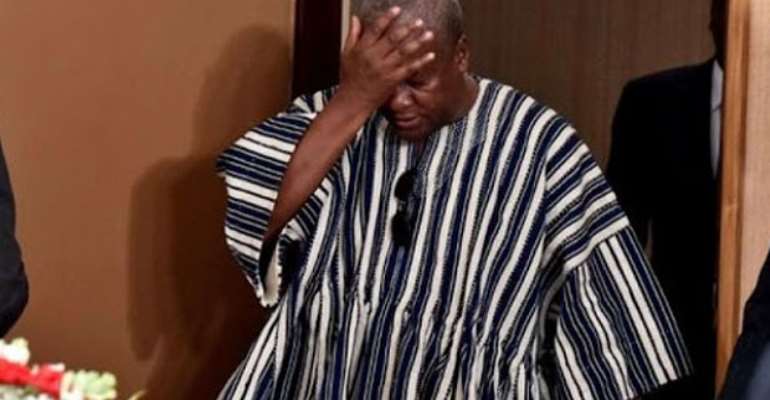 Former President John Mahama deserved the knockout he suffered from the punches of Vice-President Mahamudu Bawumia on Monday.

He should have known by now that the Vice-President is a man who would not turn his back on untruths from his opponents. He would react and sometimes very hard when the game-changing work he and his boss (the President) have accomplished this far are subjected to the kind of jokes the former President loves to indulge in.

Those who think the Vice-President was too hard and should have been lenient with the former President who was only joking should know that such drab humours have no place in the serious business of governance.

We wish the former President would maintain the little respect left on his frame. Being unnecessarily garrulous and talking about everything but the Airbus and the other scandals which exposed him to public opprobrium he has become a political laughing stock.

A female staffer of one of the Accra-based radio stations in expressing her subdued NDC sentiments on social media described as inappropriate the Vice-President's reaction to the former President's tantrums. According to her, with Covid-19 on full throttle, this is not the time for such polemics. Arrant nonsense! If only she could tell the former President to hold his horse and save us the cacophony we would have doffed our hats for her.

The Vice-President would not have hit the former President as hard as he did had the latter not spewed untruths about many things, including the management of Covid-19. She had the effrontery to query the Vice-President's advisors.

Covid-19 notwithstanding, the running of the state continues. The pandemic does not halt the engine of state from running.

We can assure the NDC that the Vice-President, as a responsible citizen, would continue to present the true pictures of affairs in the country, especially as they border on the economy.

It is unfortunate that to date the former President has not come to terms with the reality that economic figures will always expose politicians who embark on lying sprees.

We can bet that the former President only engages in his pointless attacks for want of something to do in the direction of earning electoral leverage as we inch towards the polls. Otherwise why would he seek to punch imaginary holes in the management of the Covid-19 pandemic the international acclaim President Akufo-Addo has earned notwithstanding.

It is worthwhile stating that Ghana's module in managing the pandemic is what others are just about commencing in countries with relatively better social infrastructure.

But for the change which came in the leadership at the helm, the repercussions of the bad governance we experienced under the former President could have been unsavoury, indeed, cataclysmic.

Of course, a President who failed to reverse the seemingly intractable power crisis in the country and ended up adding 'dumsor' to the vocabulary of the local English is not one who can navigate through the rather challenging maze of Covid-19 management.