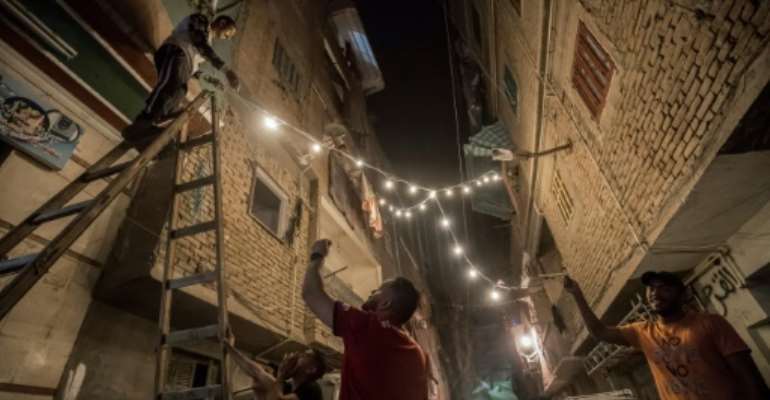 Egypt has loosened a strict curfew for the Muslim holy month of Ramadan in an effort to kickstart North Africa's largest economy. By Khaled DESOUKI (AFP/File)

Egypt's economy had just started to recover after years of political turmoil and militant attacks when the coronavirus crisis hit, impacting especially its vital tourism sector.

Having shuttered shops and cafes in late March and forced millions of civil servants to stay home, it is slowly reversing some of these measures, bringing back many state workers and extending the trading hours of shops and malls.

The blessing for the emerging economy of more than 100 million people, experts say, is that activity has kept ticking over in agriculture and construction, and especially in the vast informal sector.

"Twenty-five percent of the workforce is in agriculture, which remains unaffected," said Angus Blair, a business professor at the American University in Cairo.

"Many other businesses continue to remain open, albeit with reduced staff, and construction is continuing."

Egypt's main sources of foreign currency have been tourism, remittances sent home from workers abroad, and Suez Canal revenues -- which have all dropped sharply during the global lockdown in travel and trade.

Agriculture, like construction and the vast informal economy, have weathered the crisis better than the tourism or retail sectors. By Khaled DESOUKI (AFP/File)

But more than half of Egypt's private sector is made up of the so-called informal economy -- ranging from streetside fruit sellers to day labourers on construction sites to one-man auto repair businesses.

The epidemic has caused 400 deaths and nearly 7,000 infections in Egypt according to official data. By Khaled DESOUKI (AFP/File)

The challenge is huge for Egypt, where nearly a third of people live below the poverty line, many more face precarious conditions and social order has traditionally been maintained by a strict military apparatus.

Slow growth and fewer jobs may have "a temporary impact on poverty rates in the country", warned Alia El-Mahdi, former dean of Cairo University's faculty of economics and political science.

"The state must encourage the private sector on a macroeconomic scale so that it can overcome the crisis."

The Sisi government approved a 100 billion pound ($6 billion) aid package to stem the fallout of the coronavirus, which has caused 400 deaths and nearly 7,000 infections according to official data.

This included payments of 500 pounds a month to informal workers who lack any social insurance to fall back on.

Men wait outside a centre of the non-governmental Egyptian Food Bank to receive cartons with foodstuffs in April. By Mohamed el-Shahed (AFP/File)

Cairo also sought a fresh loan from the International Monetary Fund last month and cut its interest rates in March to encourage lending for individuals and businesses.

The biggest cash-cow, tourism, has however taken a heavy blow as the COVID-19 pandemic shuttered travel worldwide.

It was all the more painful after the country famed for the Pyramids, Nile river cruises and Red Sea resorts had last year booked tourism revenues topping $12.6 billion, the highest in a decade.

Mahmoud al-Dabaa, a travel agent in the popular seaside resort of Sharm el-Sheikh, said he was shocked at how the once bustling travel destination had turned into a ghost town with deserted beaches.

"It's the first time I see Sharm completely empty like this," he told AFP.

Dabaa had expected this season to also be profitable, but a string of cancelled bookings signals a bumpy road to recovery.

On Sunday, the government announced that hotels may start operating again for domestic tourists, provided they stick to a limit of 25 percent of capacity until the end of May.

From the start of June, this will rise to 50 percent, reflecting the authorities' confidence they can keep infections under control while jump-starting the tourism sector.

Egypt hopes to get back to the relatively better times of recent years, which saw annual economic growth rates above five percent. By Khaled DESOUKI (AFP/File)

Egypt hopes to get back to the relatively better times of recent years, which saw annual economic growth rates above five percent.

The government has been implementing financial reforms since 2016 when it secured a $12 billion IMF loan, and investors have flocked back in recent years, driving a booming construction sector.

As recently as January, Egypt was ranked among the top ten countries in Morgan Stanley's Emerging Markets Index.

Planning Minister Hala El-Saeed has estimated that the economy will slow down to about 4.5 percent growth in the third quarter because of the aftershocks of the virus.

But Blair said he was optimistic of a gradual recovery, judging that, if the constraints loosen further in June, a broader revival of commercial activity could "drive economic growth further late in the third and fourth quarters this year".