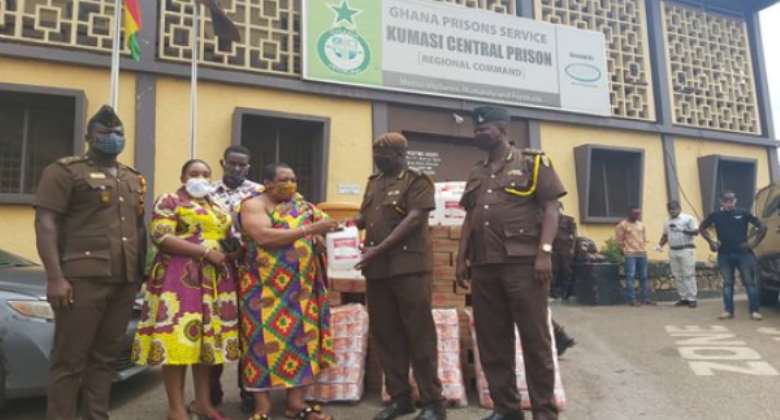 The decongestion will help ensure effective management of sanitation and promote healthy as well as hygienic conditions among inmates in the facility.

Assistant Director of Prisons (ADP) Alhaji Ousamane Tasembedo, Deputy Commander of the Kumasi Central Prison, who made the call, said this was very critical in the era of the COVID-19 pandemic, since some of the cells had to be used to serve as isolation centres for new inmates brought from the courts.

He told the Ghana News Agency in Kumasi during a presentation programme that, the Command was doing its best to prevent the outbreak and spread of the virus in the facility and that all the preventive measures and protocols were being strictly observed by both the inmates and officers.

The presentation was made by Nana Appiagyei Dankawoso I, President of the Ghana National Chamber of Commerce and Industry, to support the officers and inmates in the fight against the virus.

ADP Tasembedo pointed out that the Kumasi Central Prisons, which was constructed to house only 800 inmates, currently, had almost 2,000 occupants.

This, he indicated, had brought severe congestion and overcrowding in the various cells resulting in the spread of skin and other communicable diseases in the facility.

ADP Tasembedo said decongesting the facility would help promote social distancing and reduce physical contacts and other human activities that could promote the spread of the virus in the facility.

He called on Ghanaians to desist from stigmatizing ex-convicts, and rather, accept and help integrate them into the society.

ADP Tasembedo thanked Nana Dankawoso for the support and pledged that the Command would put the items to good use to help improve the sanitary conditions of the inmates.

Nana Dankawoso said he had been donating relief items to orphanages, widows and prisons for the past 13 years and pledged that he would continue to do more for the less-privileged in the society.

He said during the COVID-19 lockdown period, he provided food items and personal protective equipment (PPEs) for some 350 widows in the Greater Accra, Ashanti and Eastern Regions.

Nana Dankawoso called on other individuals and corporate organizations to support the Prisons Service to provide quality reformative services to inmates.