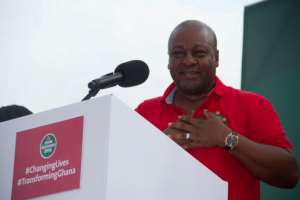 General Secretary of the opposition National Democratic Congress (NDC), Johnson Asiedu Nketia, has asked the public to disregard a purported letter capturing names of some persons supposedly being considered as running mate for the party’s flagbearer, John Dramani Mahama.

With few months to the 2020 general elections, the NDC is yet to name running mate for John Mahama.

The party has come under pressure to name a running mate amidst political actors taking advantage of the situation to throw various names around.

According to the purported letter making rounds on social media, a “Special Vetting Committee” has been set up by the National Executive Committee of the NDC to select a vice presidential hopeful for the party.

But a statement signed by the General Secretary of the NDC said the letter is fake and an attempt to distract the general public from more pressing issues.

“My attention has been drawn to a fraudulent fake letter on the selection of the 2020 NDC Running Mate, purported to be signed and issued by me. First of all, I have not issued any such statement or cause such publication to be made on my behalf on the subject of selecting the NDC Running Mate. The general public is therefore advised to ignore any such frivolous and fictitious letter, which is clearly a creation of some unscrupulous persons, who want to divert attention from serious burning national issues. Let me use this opportunity to emphasize that the purported letterhead, reference number, email address and signature on the said publication are all fake,” the statement noted.

Asiedu Nketia in the statement also rejected claims of the formation of a special committee for considering the party’s running mate hopefuls.

“No subcommittee of the party has been formed or tasked by the National Executive Committee for selection of a Running Mate. For the avoidance of doubt, the procedures for selecting a Running Mate as prescribed under Article 43 of our party Constitution, does not include the formation of any such Sub-Committee,” Asiedu Nketia added in the statement.

Asiedu Nketia also indicated that he has been forced to report to the cyber-crime unit of the Criminal Investigation Department of the Ghana Police Service by the several social media accounts impersonating him.

“Even though I do not own any Facebook account, I have had cause to report to the cybercrime unit of the Ghana Police Service, activities of some criminally minded fraudsters who have created an account in my name and are using same to defraud innocent citizens. We are eagerly awaiting action by the Cyber Crime Unit of the CID.”

Read the NDC’s statement below: