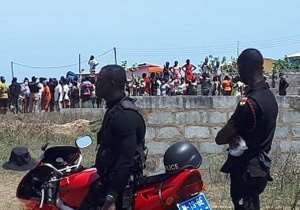 The Media Coalition against Open Defecation (M-CODe) has condemned the recent attacks by angry youth on the Queen Mother of Sakumono Village after she resisted open defecation.

On Monday, some irate youth stormed the residence of the Queen Mother with sticks, cudgel, stones, and machetes.

In a statement from M-CODe, they say they condemn in no uncertain terms anybody connected with the attacks on the Queen Mother of Sakumono Village in relation to her efforts at stopping open defecation.

The Media Coalition against Open Defecation is urging the law enforcement agencies to deal with anybody that will be found guilty of being part of the attacks on the Queen Mother.

“M-CODe backs the law enforcement agencies to deal with anybody found guilty of this act; for the youth of a community to attack their Queen Mother or anybody who is simply fighting open defecation to protect everybody in the community from preventable illnesses is unthinkable in the 21st century”, the M-CODe statement dated May 4, 2020, said.

Meanwhile, as many as 9 people including the assembly member of the area, Richard Sorgbordjor, have been arrested as the Police continue its investigations.