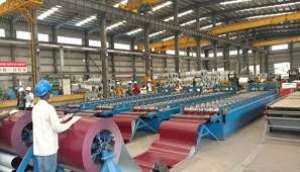 Our current and previous governments have been pushing for Local Content and passing of Local Content Laws. Local content, meaning local production and promotion of consumption of locally produced products is one of the best ways to develop a country.

But for the past five to six decades, the world has been driven more on trade and movement of goods all over the world than on Local Consumption and Production.

That is called Production and Trade based on “Comparative Economic Advantages”.

In layman's words that means:

Produce where the economic circumstances including transport costs are the best, and cheapest including the costs to transport those products to the consumers.

To explain that further: where are the cheapest resources, where is harvesting them cheap, where is further producing cheap, where can we package them cheap and how do we transport it cheap to the consumers.

Let's follow aluminum: Bauxite from Ghana, transported to China, produced into pots and pans exported to USA, Europe and back to Ghana.

Africa has many resources which are exported in bulk to China where productivity is high, labour and melting and other transformation costs are low and that gives a lower sales price than producing in Africa the EU and USA, even with all transport costs.

The big winner is: The consumer, by having affordable access to pots and pans.

Some time ago, I wrote an article as well on the end of “Economic Comparable Advantages” based upon Climate change in the future. The reason I did is that I foresaw that costs of transport would increase enormously because of taxes on pollution. This would hit shipping and airlines enormously and increase transportation costs.

I still think that these taxes will help Local Content production.

But this time there is another argument in favor of Local Content: Coronavirus.

Not only this outbreak, but the preparation of another virus or easily transferable disease will lead to countries need of building a “buffer stock” of food and a critical minimum industrial capacity in case there is another lockdown of their or other countries resulting in commercial and transport closure of borders.

That's Local Content, Local Production, Local Use and export of overproduction to increase a national income/GDP.

Reasons this hasn't worked for many years are not only low transport cost from Africa, but also low capacity, low productivity, low quality of labour, and high costs of energy.

Governments in Africa but also in the rest of the world are trying to influence that by influencing the production circumstances to favour local production.

In the developed world they do that by giving preferential energy prices for industries and all kinds of subsidies to companies, farmers and service providers.

Developing countries don't have the money to subsidize Local Production and they often seek to influence investors with tax holidays for mostly foreign investors to build capacity to strengthen their industry.

The idea behind Local Content Laws is to close the borders to force consumers to use locally produced products and create only jobs for its own population.

By itself a noble idea but in practice it has hardly worked to strengthen a countries economy.

Until Climate Change and Coronavirus times I was fanatically opposing forcing Local Content by blocking access. For 1 simple reason: These Local Content Laws, almost always lead to complacent Local Entrepreneurs leading to lesser quality for higher prices with one big loser: The consumer.

I am still against forcing Local Production by closing access to markets, in this case, my own country: Ghana.

We have a perfect example of how bad these laws worked for over 30 years in Nigeria.

Nigerian producers became very rich, because profits are always optimized, there are hardly investments in modernization and development, staff is not trained etc.

Local Content enforcement with laws is a form of market protection.

The ultimate goal of market protection is or at least should be: protect an infant market from foreign economic attacks on Local Industries, Farming and Services until it's strong enough to compete in an orderly way.

Contrary to Nigeria, South Korea is a good example. South Korea protected its industries with Local Content Laws and restrictions for foreign companies, but at the same time it also forced its local industries to reinvest, modernize, develop products and professionalize staff.

I sincerely hope that rising transport costs and creating buffer production in Ghana can be used in smart ways to kick start Local Content Capacity and help to develop Ghana in the future.

At this moment Ghana and many other countries are still concentrating on containing the Coronavirus and its economic consequences but we should start thinking about the opportunities for Ghana after the crisis.

We have the resources, we have the land, we have a young population, labour costs are about the same as in China, and we have AGOA and EPA to export without any trade barriers.

We need to school our (technical) labour force in modern ways and make sure our higher educational institutions educate and train our future management in a “worldwide” and open manner. With all this, Ghana's Black Star will rise to its glory of the 1960s and higher.