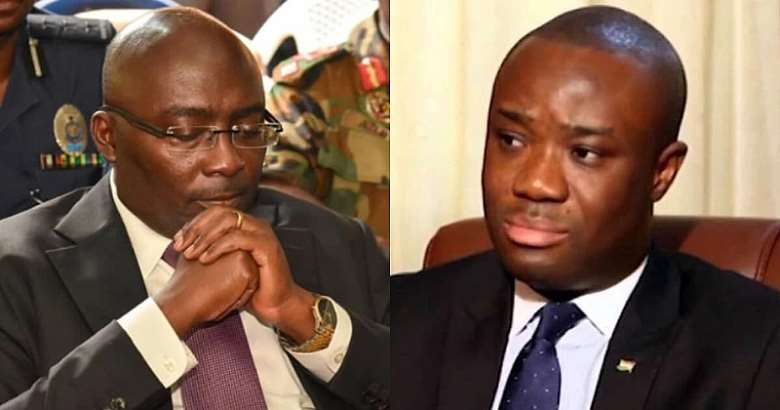 Vice-President Mahamudu Bawumia has become a “butt of jokes” since he has become “pedestrian” in his comments lately, a former Deputy Communication Minister Felix Kwakye Ofosu has said.

Responding to Dr Bawumia’s recent reaction to former President John Mahama’s remark that the COVID-19 situation has put the Akufo-Addo government’s oft-touted “robust” and “resilient” economy in ICU, Mr Kwakye Ofosu said the Vice-President’s assertion that the current administration is a better manager of crises than the Mahama administration, is an “invitation to absurdity”.

Dr Bawumia has advised Mr Mahama to speak based on the data available with regard to how the economy is performing and stop running the risk of embarrassing himself.

Mr Mahama, in a Live Facebook interaction, said the economy, under the leadership of President Nana Akufo-Addo, was in intensive care the COIVD-19 pandemic.

“Unfortunately, this government has used a lot of propaganda saying the economy has been the best that we have ever had since independence. Unfortunately, just one month of coronavirus the economy is in ICU. If we didn’t run to the IMF for the one billion rapid credit facility, it is possible that in the next month probably salaries would not have been paid and so our economy is on ventilators, and it needs thinking to rescue it from the ICU.” Mr Mahama said.

Responding to the flag bearer of the National Democratic Congress after a COVID-19 response team meeting on Monday, 4 May 2020, Dr Bawumia noted that Mr Mahama’s claims that COVID-19 has exposed how poorly the economy has been mismanaged was untrue.

Dr Bawumia indicated that despite the heavy toll the coronavirus pandemic has taken on the country’s economy, the government’s policy programmes and plans are still in progress.

In Mr Kwakye Ofosu’s reaction, however, he said Dr Bawumia’s comparison is “basically, inviting us to engage in a beauty contest between me and my wife”.

“That is how illogical the vice-president’s comment is”, he told Gemma Appiah on Class91.3FM’s 505 news programme on Monday, 4 May 2020, adding: “Whenever you want to do rigorous analysis, you must compare like to like, you cannot compare an orange to an apple and think that you’re being smart. It is not a smart thing to do”.

“Dumsor is not the same as COVID-19. So the mere fact that you call something a crisis, doesn’t mean you handle every crisis the same way. It’s the basic knowledge that every serious vice-president should have, except that this our vice-president, for some time now, has become the butt of jokes because of how pedestrian he has become in his analysis. He thinks that he can abuse the confidence and the respect people have for him because of the office he occupies, to say anything he wants”, he noted.

Concerning the power crisis, Mr Kwakye Ofosu said: “When you have power outages, you invest in getting generating capacity so that the outages stop”, but “COVID-19 is a disease bordering on life and healthcare; because of that, the government is forced to compel people to stay at home, while people stay at home, they cannot go to work, so, they don’t earn any income or revenue, their businesses collapse, people go hungry if they don’t have an alternative source of livelihood, so, the government has a duty – and governments everywhere in this world did that – to provide relief, at least, for the period that people are staying home”.

“That relief does not go beyond a certain limit. Indeed, if you assess how this government has come to fund these relief interventions, it is the clearest indication that we are broke as a country, that this economy is in tatters, it is shambles”, the former deputy minister said.

Adducing evidence to back his argument, the NDC’s parliamentary candidate for Abura Asebu Kwamankese said: “We first went for about $300 million from the Stabilisation Fund, and listen to the name – Stabilsation Fund. It means that there is instability so you must stabilise the situation. That is an admission by the government that there’s instability in the economy. He then went for $100 million dollars from the World Bank. Which serious economy goes for $100 million dollars when it is faced with a crisis?” “Then the biggest of them all: they went to the IMF to take what we call a Rapid Credit Facility. That Rapid Credit Facility is worth $1 billion. That $1 billion is going into what we call balance of payment support. It simply means our reserves have been dissipated and if you want to see that an economy is in distress, that is one of the key indicators. We don’t have reserves, so, the IMF had to bail us out. There’s no economy thriving that will go for balance of payment support”, he asserted.

Again, he noted, “this government’s own figures and figures of the IMF, confirm the fact that this economy is in shambles”, adding: “As I speak to you, when they read the budget in November 2020, they projected that we’ll grow at 7.5% but available data shows that we will grow at 1.5%, which is the worst in 40 years. Our exchange rate is almost $1 to GHS6, which is a catastrophic collapse of the currency. Our debt-to-GDP ratio is projected to go beyond 76%, it means that we have become a highly indebted poor country again. Our budget deficit is projected to go beyond 9.5%. When Dr Bawumia’s government came into power, the deficit was 6.3%. The bigger it is, the worst it is. So, every indicator shows the economy is in shambles”.

“Dr Bawumia, despite his lofty talk, has shown flat-proof that when it comes to managing the economy, so, when the former President says that our economy is in ICU and is shambles, it is backed by data, except that in the case of Dr Bawumia, he tells you that use data. Because of that, when he tells you: ‘One plus one is three’, you must accept it because he has used data, even if it does not make sense. So, he cannot use sophistry and propaganda to wiggle his way out of the shambles in which they’ve left the economy. The fact shows that this economy is in shambles; there’s no logical analyst out there who will compare dumsor to COVID-19”.