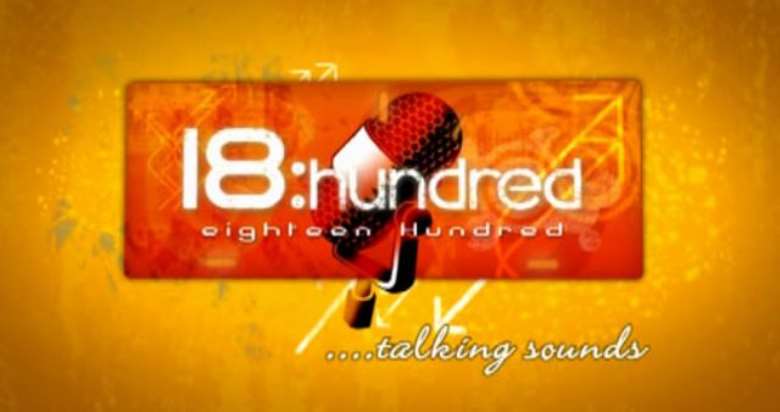 1800 is a Television Entertainment Talk Programme that profiles accomplished Ghanaian Artiste. The programme goes into the aspect of the artiste lives that is not in the public domain, their families, friends, beginnings, what they stand for, fears and take on important social issues. 1800 also addresses rumours, gossips and controversies between artiste and other issues in music.

Overview
1800 is a fusion of one on one studio chat, cross sectional opinions about selected artiste on the relatively unknown sides of their lives. Views on pertinent social issues are also sort. Rumours, gossips and controversies are addressed on the show. The programme looks at the following areas; thus: personal, corporate and recreational lives. 1800l craves into their character make-up, family background and disposition, temperaments, personal drives, educational background and other interesting aspects of artiste lives. The programme is packaged in a 30 minute magazine format. The focus of the programme will be;

1. To educate viewers on issues bordering on real facts of life encompassing the social, economic and other human interest areas.

2. To learn about the other side or the personal lives of the people who have either excelled in their chosen careers in their own right or made tremendous impact in the lives of many. It will thus, make viewers know about the “secrets” behind their successes and achievements on one hand and bring out their pit falls which will serve as a guide for those who particularly want to take after them on the other.

Presenter
Godfred Laryea is a charismatic, dynamic and entertaining presenter. Popularly Known as BLACK BOY, he has vast experience in the Entertainment Indusry. In 2000 through to 2003 while he was at the University Of Ghana where he studied English, he worked with Radio Universe 105.7 FM, presenting many shows. He worked with Joy 99.7 FM in 2004 and moved on to work with Chioce 102.3 FM. He also worked as MC at the Boomerang Night Club (Ghana's Biggest Club). BLACK BOY was the host of 4 Syte TV, a weekly Entertianment Review programme on TV 3. He was the lead act in the Guiness Ghana, One Cheer Promotion Advertisement. He has had a few gigs in the United States and the United Kingdom, where he was the MC for several programmes on radio, clubs and on TV including being a guest presenter on Original Black Entertainment Television (OBE) in London. Some of the international artistes and personalities he has interviewed and had encounters with in his career include Akon, Nattan, Sway, B. B. Winnace, Sister sledge. BLACK BOY has interviewed most of the big names in the Ghanaian Music Industry, some of which includes, Reggie Rockstone (the originator of the music genre HIPLIFE), Ofori Amponsah (a huge Highlife sensation), TICTAC (who has had performances with 50 CENT), Vision In Progress(VIP) and Bright(Buk Bak Fame).

As a person, he is fun to be with, easy going and down to earth. Born to Mr. and Mrs. Laryea, he has a big Sister. His hobbies are listening to Music, watching Movies and Talking.

'Captain Smart arrest is intolerance, he did no wrong' – Med...
7 minutes ago