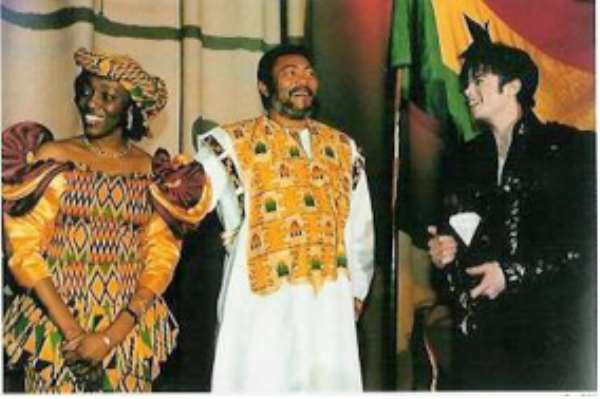 
Former President Jerry John Rawlings has expressed his condolence to the family of Michael Jackson whom he described as the Emperor of Pop.

The Former President said: “I once had the honour of meeting with Michael and we struck a great friendship borne out of respect. Michael changed the world and always knew that with change he would appeal to many across all borders even if some in the non musical media did not always appreciate it”.

The Former president whose musical tastes vary recognized the impact that many of Michael's songs had on him including “Thriller”, “Beat it”, “Billie Jean”, “Bad, “Black or White”, “Dangerous”, “Scream”, “Earth Song”, “You Are Not Alone” and “Cry”.

In particular “They Don't Care About Us” and “Heal the World” were constants, which Mr Rawlings considered a constant in his listening pleasure.

Former President Rawlings described Michael Jackson's departure as a monumental loss to the whole world. “He was human and so sensitive.”

The last time the world lost someone in the entertainment world of this stature the Former President said was when Elvis Pressley and Chuck Berry died.

“The world has lost one of its greatest sons. Michael you made an impact and you changed the whole world in so many ways. Go in peace….you will be missed!”