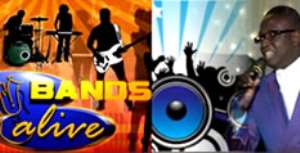 The second season of bands alive so far has proved as an improvement of the first season, with several of the bands improving on their

Having taken off with twelve bands competing with each other to emerge the ultimate winner of the competition, three bands unfortunately have make their way to the exit of the show through the weekly evictions.

With interesting such as AKAAK, HM, VISION, NOBLES,WIZZY, HARMONY BAND and several other mind baffling names, each week the bands are set to compete with each other with their instruments and vocal qualities as their weapon.

What compelled your entertainment train driver to make a date with Bands Alive was the host of the show who we all know as KKD the finest! And yes on the show one will not mince words when you refer to him as the finest.

His sense of fashion goes way back in the days of the Embassy Club pleasure where he hosted the Miss Ghana shows, so smooth was he with his words and art of hosting the competition it was such a delight to watch him on stage.

For all the fans of Bands Alive who keep wondering who KKD is, your train driver this week is given you a little insight on the man who over the years has proved to be the finest host on any show.

KKD is the first son of Opanin Kwasi Darkwah and Ohemaa Ama Asokwa Kyei Darkwah, owners of Darkwah Plaza and Jatokrom Hotel in Tema. Since childhood he has had this burning desire to become an ambassador, to serve as a fitting representative for his motherland.

He has a unique way with words and an eye for style and fashion like no other. His poise and control as a public speaker and on stage as a Master of Ceremonies makes it seem as though he was born on a dais. KKD has evolved over the years and has contributed immensely to the media and entertainment industry in Ghana.

KKD got into media before he knew that is where he wanted to be. He found his 'calling' early as his parents had record shops and an enterprise that promoted select West African musicians in the early seventies.

Perhaps being in the company of great musicians like Nana Kwame Ampadu as a toddler helped shape his dream.

From organizing jams and dance competitions for secondary students, he went on to organize fashion shows in PRESEC Legon. By age 15 he was writing advertising copy and from age 17 recording jingles and voice-overs following the commendation of GBC sound technician, Philip Agbale.

KKD won the maiden Africa Disc Jockey Championship while he was still in GIJ and donated half of his prize money to the School for the Mentally Handicapped in Dzorwulu. The Finest has a long roll call of proteges: Azigiza Jnr, Fiifi Pratt, Kwame Bampoe, Kwame Faakye, Baaba Andoh, Cox Tamakloe, Lovin' Cee and Kofi Okyere Darko, to name just a few.

As co-owner and director of programmes and marketing of Sunshine Radio he insisted all his presenters and newscasters use their African names, a trend which has influenced young broadcasters since.

By age 31, KKD had managed Advertising and Promotions for ABC Brewery Limited in Achimota and served on the executive planning committee for the Miss Ghana Beauty Pageant, all while commanding the highest booking fees for a presenter in this part of the world. But his young wife's insistence on moving to the UK in search of a job placed a booming career on hold.

His first break in Europe came when after being hired by Alice Congres of France to co-host a corporate event for Elf in Africa, he got connected and later found a job as an Investment Researcher at Georgeson Shareholder Communications.

He invested what was left of the money he brought from Ghana and used some to buy his favorite car, a Jaguar Sovereign in celebration of his new city job after 6 months in the UK.

By 2001, the KKD we know had re-emerged as he got hired and trained for a position in a healthcare management firm in London. On the side he started his private enterprise producing advertising campaigns for African-owned businesses in the UK and the US and presenting events.

He holds an MA in Audio Visual Production and He is a Chief Executive of the Finest Production.