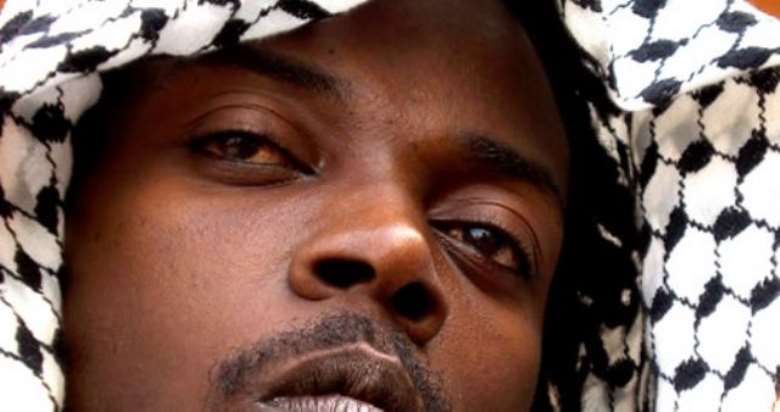 The court case of Kwaw Kese, who is accused of fraud, took another strange turn on Monday when the hiplife star was reprimanded for drinking water in the dock. "Don't be drinking water while in the dock. You can drink the water while sitting," the Judge said. Kwaw, who always comes to court with a bottle of water, apologized saying, "My lord, I am sorry."

Meanwhile, there were some hitches when the second prosecution witness, Ms Rose Acquah, daughter of Ms Chappell mounted the witness box. Ms Acquah in her evidence mixed up date on which Ms Chappell said her mother arrived in Ghana. Witness told the court that her mother arrived from the United Kingdom on December 4, 2008 but when she heard a whisper in the court that it was rather January 4, 2009, she pleaded with the court to correct the date.

The defence counsel, Naa Nortey, therefore suggested to the court to either empty the court or hearing be conducted in chambers. The court obliged and emptied the court but the audience was called back after 10 minutes for hearing to continue. Led in evidence by Police Inspector Jubiok Michaels, Ms Acquah admitted knowing Kese through Ms Chappell.

The witness said on January 4, this year, she had a call from her mother at 0800 hours that she had arrived from United Kingdom and was lodging in a hotel on the Spintex Road. Witness said she arrived at the hotel at 1100 hours and her mother showed her a bag containing money. According to the witness, Ms Chappell requested that she removed the money from the bag.

Witness said Kese after collecting the money left them in the hotel room. She said she later gave a statement to the Police at the Offices Regional Criminal Investigation Department.

The prosecution earlier told the court that Kese and Ms Chappell were "good lovers" in 2008 and she decided to develop her plot of land at Prampram after the two had visited the site.

The prosecution said in January this year, Ms Chappell returned from the United Kingdom and gave 7,000 pounds to Kese but he failed to use the money for the project. After several attempts to collect her money, she lodged a complaint with the Police and Kese was arrested. During Police interrogation, Kese admitted receiving 1,000 pounds and not 7,000 pounds.