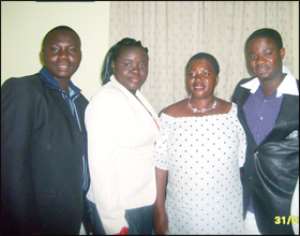 Isaac, Cee and Ampong in a pose with Mr & Mrs JD Great Ampong is one of the few gospel musicians who need no introduction, having been on the music scene for quite some time now.

Sections of Ghanaian gospel music fans rank him as one of the prominent recording artiste and performer in Ghana's gospel music industry today; and certain key personalities in the industry have also described him as a talented music star whose style of performance is second to none.

Performing at the JD Fast Food at Kasoa last Sunday, April 12, Great Ampong delighted music fans with his songs, leaving the fans yearning for more from him.

He performed on the same platform with his team made up of Isaac and Cee, who turned the whole venue upside down as they sang most of their hit songs.

If you have not watched them perform live on stage, then you should have been at the JD Fast Food to see the creative stagecraft and dancing skills of the trio who are gradually taking over the gospel music scene.

With their music and style, they have managed to convince music critics and fans who attended the show to appreciate that they are Ghana's best and the leading entertainers in the country as far as gospel music is concerned.

Music lovers were on their feet throughout the show dancing alongside the trio.