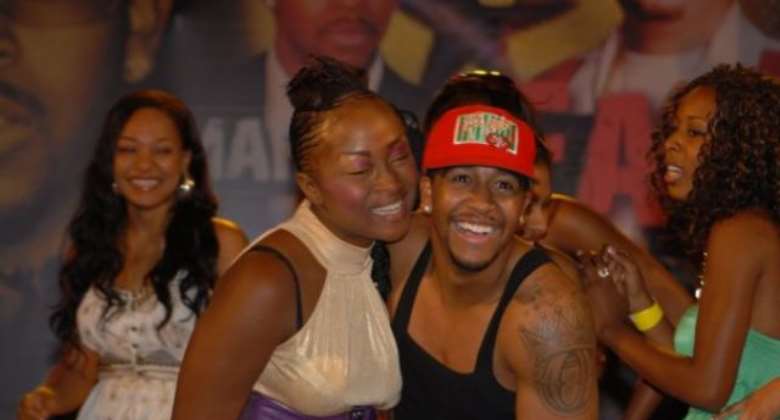 Without a doubt, the biggest highlight of 2008 in Ghana was the general elections but the entertainment industry certainly had a good year. Talking about elections, entertainers got involved in politics this year like never before but that is another subject for another time.

The year got off to the good start with the African Cup of the Nations and while the performance of the Black Stars made us proud, we also got the chance to witness some amazing concerts, before, during and after the tournament. This included the MTN 'Go Africa' concert featuring African acts like Blu 3, Malaika, King Nee, Samini and several others. The original idea was to get at least one artist from each of the 16 participating countries but sadly that didn't happen. I really wanted to hear some North African hip-hop for once in my life. LOL!

Later in the year, we witnessed the 9th edition of the Ghana Music Awards. For the first time, gospel music was the biggest winning genre as Ohemaa Mercy and Lenny Akpadie won the Album of the Year and Song of the Year respectively. However, the biggest winner was Kwaw Kesse who took home the Artist of the Year and 4 other awards, as well as the accolade, 'King of the streets'. The ceremony which was hosted by Doreen Andoh and Samini had its highlights but most people missed having Kwami Sefa Kayi as host. The ceremony didn't go without some controversies either; some group of artists boycotted the ceremony because they felt cheated after the industry awards ceremony held a few days ahead of the main show. After 9 years in existence, the producers of the GMAs still have a lot of work to do in terms of definitions for the various categories. Let's hope the 10th anniversary would take the challenges in the past years into consideration and deliver a memorable experience for all of us.

In recent times, we have witnessed a marked improvement in our film industry and so far, three movies namely 'Run Baby Run', 'Life and Living It', and 'Scorned' stand out for mention. Run Baby Run did us proud when it won 4 awards including Best Picture, Best Director and Best Screenplay at the African Movie Academy Awards. Everyone's favourite Home Sweet Home child star, Evelyn Addo (Nina) also won the Best Child Actor award. I have never been one to give much credit to the AMAA because I think it is a Nigerian thing and not much of an African award but hey, at least we made an impact. Hehe!

In the world of fashion, Ghana left a mark in 2008 when Exopa held its first Fashion Week. Quite frankly, it was the first of its kind, period! The event brought together fashion designers from across Africa in celebration of young creative minds. I was personally impressed with the Qumi Bespoke line. Still in the world of fashion, finally we proved to the rest of Africa that we have some fine girls in Ghana, when Kate Tachie-Menson, a struggling Ghanaian model won the 2008 M-net Face of Africa contest.

In 2008, we proved that we could also pull in international artists. It started at the GMAs when Ja Rule and Keisha White graced the stage. Ja Rule was reported to have collaborated on a track with Tinny and Keisha with Becca. In July, Fat Joe and Omarion wowed fans at the Accra International Conference Centre. Although, Sean Kingston didn't show up as previously advertised, it didn't take away from the shine. The last group of international acts including Mario, Wyclef and Eve came in to perform at the now infamous 'Zain 026 Experience' concert. Well, the least said about the experience, the better. The microphones failed through ¾ of the show but at least Eve and Wyclef saved the event at the very tail end. Oh I forgot to mention that sexy Jamaican sisters, Brick and Lace were also in Ghana for one weekend. Their performances were done at the Boomerang Nightclub and their shows were completely forgettable. What a waste!

Other highlights include the birth and the overemphasis on a switch to crunk music. Although some of the 'crunk' songs were really good, others should have never gotten out of the studio. Richie did a good job out of the crunk theme and Okyeame Quame's 'Woso' was one of the good ones. And who can forget the Tema boys? 2008 was really a showcase of what TM represents; the lyrical finesse of Sarkodie and the swagger of R2bees are indications of the flavour and skills of the industrial city. Let's see what 2009 has for them as they ready their albums.

Isaac Kwabena Dankyi-Koranteng was hired on the maiden edition of Apprentice Africa and Joseph Nii Ankrah, 1st runner-up in the original TV3 Mentor again won the 1st runner-up position at the Project Fame West Africa singing competition. I hope that Nii can take his new found fame and turn it into success across the region so we can win some awards in Africa next year like Praye did with the Kora Awards after winning the Nescafe African Revelation. 2008 was not a good year for Ghanaian music internationally, since we missed out on the Channel O and MTV Africa Music Awards.

Sadly, 2008 wasn't all about good news in the entertainment industry. We also lost some iconic individuals in the industry. The tragic losses included ace highlife/traditional music producer, Faisal Helwani; Michael Dwamena who had a very successful return with his hit single, 'Ngozi'in 2008; actor and showbiz impresario Kwame Owusu Ansah; and ace drummer Guy Warren aka Ghanaba. Ghana is proud of their contributions towards the development of arts and culture, and may God bless their souls.

Happy New Year! May 2009 be an even better year for the industry.

I'll hand over power to the next elected president on 7th Ja...
12 minutes ago

[VIDEO] Ghana is hot; our girlfriends are moving to Togo – J...
21 minutes ago