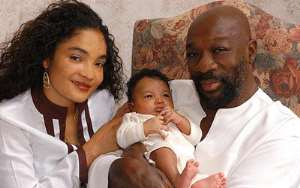 The news of the sudden death of Isaac Hayes was shocking to many Ghanaians all over the world. The legendary Grammy and Oscar winning US mega musician and entertainer is also known in Ghana as Nene Katey Ocansey I, Nkosuoehne (Chief for Development) of the Ada Traditional Area and a beloved member of the Ocansey Royal Family.

He co-founded the Nene Katey Ocansey I Learning and Technology (NekoTech) Center of Excellence in Ada, Ghana, with Princess Asie Ocansey of Ada. They were assisted by Isaac's spiritual advisor, Reverend Alfreddie Johnson founder of the World Literacy Crusade of Compton, USA.

Isaac's first visit to West Africa was with another baritone man, the late Barry White in 1991, when the two went there to shoot a video for “Dark and Lovely (you over there)”. In 1992, Isaac accepted Dionne Warwick's invitation to join her on a visit to the Elmina and Cape Coast Castles in Ghana. He was hosted by Brother Akbar Mohammed of the Nation of Islam.

This visit to the Elmina and Cape Coast slave dungeons had a profound emotional and spiritual impact on Isaac. It became a turning point for the man who was also known, worldwide, as the 'Black Moses'.

Said Hayes with tears in his eyes: “It was almost like I heard the voices of my ancestors saying: 'We've come back home through you. The circle is now complete'. ”

Isaac was overwhelmed by the hospitality and love he felt in Ghana. Many people would come up to him in the streets to say with smiles, “All my children were conceived because your music created the right environment for love making,” and Isaac would laugh heartily. He knew he had hit a very deep cord in Ghana. Isaac felt extremely at home in Ghana and the people of Ghana loved him.

It was during this time in Ghana, May 1992, that he met the woman who was to become the love of his life, Adjowa, now his wife with a lovely son, Nana Kwodjo.

Upon his return to the USA, the new Nene embarked on several speaking engagements speaking to the African American communities, associations and black expos. He and Dionne Warwick tried to raise funds for the restoration of the Castles, but it was not easy. Isaac then realized that he should focus rather on giving the people of Ghana the powerful gift of literacy - “teaching the people how to fish, instead of feeding them fish”.

It was at one of these speaking engagements on September 18, 1992, at Queens, USA, that the future King (Nkosuoehne of Ada ) met the Princess. Isaac met Naa Asie Ocansey, a Ghanaian Princess from Ada who attended the event with her husband. Princess Ocansey was deeply touched by the sincerity of Mr. Hayes to help Ghana and Africa. She presented Mr. Hayes with a symbolic handwoven royal kente cloth, thanking him for his concern for her people.

Princess Asie Ocansey asked Isaac: “Would you like to be a King?” and he replied joyfully, “Yes!”

Later the Princess arranged with her father, the late Nene Akrofi Kubi III (a kingmaker of the Ada Traditional area) to honor Mr. Hayes. In December 1992, when Isaac came to Ghana to perform at the PANAFEST, a grand coronation was held for him and he was given his new royal name, Nene Katey Ocansey I. (”Katey” means strong enough to calm a lion; the royal family name “Ocansey” means “I do as I say”).

Later that evening he performed at the PANAFEST in Accra and joyfully announced to Ghana that he was part of the Ocansey Royal Family of Ada.

In 1993, Isaac became the International Spokesman for the World Literacy Crusade. Together with Applied Scholastics, ABLE and the Celebrity Center of the Church of Scientology, the World Literacy Crusade, led by Rev. Alfreddie Johnson, Isaac and Princess Ocansey, brought the gift of literacy to the rural villages of Ada and to other parts of Ghana.

By 1998, 53 teachers had been trained at the various schools to be trainers in Ada. Later, three teachers were sent to the USA to finish their training at a higher level. Later on in the year, 1,000 students were trained in the Study Technology and several hundred students wrote success stories on how their grades have improved as they applied the techniques. The programme was expanded to the city and several students gained this valuable knowledge on how to learn and greatly improved their grades.

Seeing the great possibilities that education could generate for the people, the selfless Nene decided to postpone building his personal palace in order to build a training centre for the children of his traditional area.

The “Nene Katey Ocansey I Learning and Technology Center”, (NEKO TECH) is a state of the art beautiful 8,000 square foot building architecturally designed by Plan Architects of Ghana and built by

then of BET-TV, plus numerous other celebrities, all of whom came to be involved in Ghana through Isaac.

To make sure the projects at NekoTech would be well administered, Isaac sponsored an expert consultant, Roger Harrison to teach trainers at Ada about the L. Ron Hubbard Administration Tech, which is still being used to efficiently run the centre.

Through this centre, several projects of both community and global impact have helped many people in the areas of illiteracy, poverty and HIV/AIDS reduction.

Isaac and Princess Ocansey set out on several speaking engagements to churches, associations and black expos spurring tourism to Ghana heavily. Resulting from this, several thousand African Americans made pilgrimages to Ghana between 1992 and 2002. A positive impact of these pilgrimages was the promotion of Afrocentric dressing. Isaac encouraged other Hollywood celebrities to wear African inspired clothing. One of his favourite Ghanaian designers was MGOGH in Ghana and Mashood in New York.

In October 1993, he assisted Princess Ocansey to launch the first Afrocentric clothing line — The Ashanti Kingdom Collection — in Detroit's Dayton Hudson and Marshall Field department stores, creating the first major African clothing line in a major USA boutique. He also helped launch the famous “Kwesibear” which told the story of African Royalty to over 70 million viewers on QVC-TV.

This high level of exposure brought Ghanaian products to the attention of JC Penny and Pier One Imports creating multi million dollar businesses for many members of the Ghana Export Promotion Council who exported several Ghanaian craft products and clothes to these major stores.

He mobilised the visit of numerous top US CEOs to Ghana, many of whom have come to invest in Ghana through the GIPC and other private projects, which included African American US multi-billionaire casino owner, Don Baden, who later went to Zimbabwe to open up a multi-million dollar auto assembling plant.

He heavily promoted Ghana to investors for salt development in Ada. He personally co-sponsored two of the world's top three salt experts — Max Reynolds (now Elder Reynolds serving on an LDS mission in Koforidua) and Dave Butts — to visit Ghana to assist the Songor salt project to increase its yield as well as to do a national survey of the Ghana salt industry for economic development.

He hosted the former Minister for Mines, Hon. Cecilia Bannerman in Salt Lake City, Utah, to visit with one of the world's largest solar salt production facilities there, Great Salt Lakes (GSL) and sponsored the training of three Ghanaian students in solar salt mining.

The studies he sponsored showed that the Ada area has the potential to produce over 1.2 million metric tons of salt annually while at this time, the production of salt is less than 100,000 metric tonnes. Salt was then selling at $40/ton. This meant the Ada traditional area could have been reaping over $48 million from salt production, instead of less than $4 million being received at the time!

The Nekotech Centre currently trains several workers as well as jobless men and women and helps them to increase their value and their employability through international work ethics, certification programmes for their legal migration in top paying jobs overseas.

Young men previously earning $1,200 a year are able to now earn over $30,000 a year after the Nekotech training and certification — giving them a true leap frogging opportunity of a lifetime to break generational cycles of poverty.

One of his important contributions was to the Save A Million Lives HIV/AIDS Project. Working with Princess Ocansey and US movie star Steven Seagal, he helped to mobilise over 21 US universities with medical schools to work along side USA doctors to help the rural poor fight HIV/AIDS in a five year project at NekoTech.

This programme, in its final year was rolled out nationally in an outreach programme — to Kumasi, Accra and Cape Coast.

All the contributing medical doctors and students underwent an African re-naming ceremony and were given Ghanaian first names with surnames “Katey-Ocansey” tracing back to the fact that they came back to Africa through the Isaac Hayes line.

Many ancestors have indeed come back through Isaac.

Latest Photo Reports
Catch up with all the political quotes from our politicians.
Advertise here
More from General News
ModernGhana Links
Netizens jab Lasmid for saying he is the biggest artiste in Ghana; compare him to Yaw Tog
My godfather wanted to sleep with me — Feli Nuna
KiDi to start charging for features; blames decision on economic hardship
TOP STORIES

Negotiate settlement of Teacher unions’ grievances – NLC to...
3 minutes ago