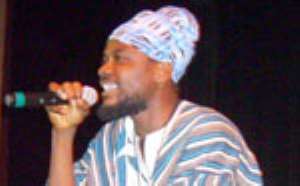 EMMANUEL ANDREW (Batman) Samini is likely to cause a stir in the music industry as he prepares to storm the scene with the release of a 21-track album which is also his third, next month.

This is gonna be the beginning of the real Samini journey. My first two albums - Dankwansere and Samini - are just introductions to what I can do.”

The album, to be released under the Samini music label would be titled Dagaati, after the MTN ambassador's hometown in the Upper West Region of Ghana.

“This is to encourage my fans to know their roots,” he explains. Besides the usual irresistible love themes Samini is known for, he said, “This time I will also be touching on Mother Earth and Agriculture to further encourage Ghanaians to go into farming.”

The album which is a medley of hip-life and pop tunes is currently not fully 'cooked'. However, the father of one said Ghana should expect hit songs like African Unit, Rasta Man, My kind of girl, Groove, Nubian Girl and many more.

He collaborated with hot international stars Steel Pulse, Sway - UK, Ethana from Jamaica, Face-Nigeria, Nameless - Kenya and Ghana's Kwasi P among a host of others on the local scene.

Hottest Photo Reports
Catch up with all the political quotes from our politicians.
Advertise here
More from General News
ModernGhana Links
Some artistes feel exploited by award schemes—Mr Logic
The history of allegations against R&B singer R. Kelly
I want to be an MP after my singing career, I must advocate for the disadvantaged — KK Fosu
TOP STORIES