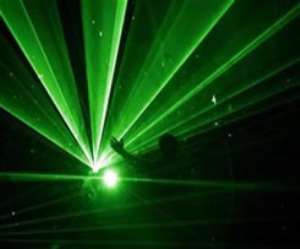 
Dozens of partygoers at an outdoor rave near Moscow last week have lost partial vision after a laser light show burned their retinas, Russian health officials said on Monday.

Moscow city health department officials confirmed 12 cases of laser-blindness at the Central Ophthalmological Clinic, and daily newspaper Kommersant said another 17 were registered at City Hospital 32 in the centre of the capital.

"They all have retinal burns, scarring is visible on them. Loss of vision in individual cases is as high as 80 percent, and regaining it is already impossible," Kommersant quoted a treating ophthalmologist as saying.

Attendees said heavy rains forced organisers to erect massive tents for the all-night dance party, and lasers that normally illuminate upwards into the sky were instead partially refracted into the ravers' eyes.

"I immediately had a spot like when you stare into the sun," rave-attendee Dmitry told Kommersant.

"After three days I decided to go to the hospital. They examined me, asked if I had been at Open Air, and then put me straight in the hospital. I didn't even get to go home and get my stuff," he said.

Cosmic Connection, promoters of the Aquamarine rave, were unreachable and did not list contact numbers on their Web site.

The owner of a Moscow laser rental company told Reuters the accidental blindings were due to "illiteracy on the part of technicians".

"It was partly the rain, but also partly the size of the laser. Somebody set up an extremely powerful laser for such a small space," said Valentin Vasiliev, who said his company did not provide the Aquamarine lasers.