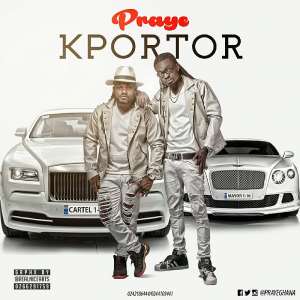 After ending their hiatus and announcing their come-back in November '15, Praye has been on a journey to prove that their return is accompanied by a new and improved quality.

The trio-turned-duo, have been on a campaign; making an impression on every stage they grace. From the Tigo Music Uplugged in Kumasi to the Freedom concerts, Praye has been hailed as the favorites.

Many have raise speculation abouta third member, but the group seems to have shut down any such rumors, as they unveiled the artwork for their new song. Reports reaching ORDIO, indicates that the song may have been ready over a month ago, as the group has hash-tagged it's title to many of their social media post.

The new artwork, doesn't only shutdown the rumors of a third member, but also oozes class. Speaking to a member of team, he assured the fans of renewed energy from Ghana's favorite music group, adding that the group has a lot of surprises stocked for their loyal fans. "The new song is titled 'Kportor' and it tells a story, while moving you to your feet. This year is year of pleasant surprises and we urge the fans to stay with us", he said.