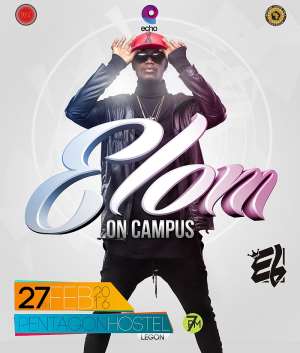 With a belief in creativity and exceptional artistry, Echo House will for the second time collaborate with an artiste to launch and perform an album live on campus. Sarkodie was first with ‘Mary on Campus’ during the University of Ghana edition of Fresh ‘a’ Fair (a trade fair for freshmen on the various campuses).

The past year has seen the surge in hip-hop and authentic music that defines Ghana and is partly due to the help and hard work of arguably the most versatile Ghanaian artiste, EL. 2 years ago, he released B.A.R and hip-hop found its place in the market of music. Since then, he has worked on one project after the other and lived through different genres to show off his creativity, innovation and unquenchable thirst for things different.

ELOM on campus will be hosted at the African Union (Pent) Hall Week celebration and will the crowning event after the second edition of Frat House (the Wildest Night Ever) on Friday, 26th Feb at Pent. The Echo House productions will feature top notch performances from the artiste and his friends who will take turns to do renditions, originals and take the audience through his wide catalogue. All these activities will start with an album signing in the afternoon.