Sonnie Badu: I Would Like To Sponsor Yaw Siki 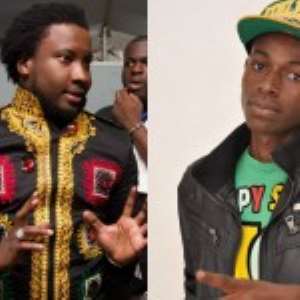 UK-based Ghanaian gospel musician Sonnie Badu has offered to sponsor former hiplife artiste Yaw Siki as he embarks on a journey to preach the word of God.

The international gospel musician believes that the new path the former hiplife musician is charting is a difficult one and so he will need support to achieve his goal.

Former hiplife artiste Isaac Okai, known as Yaw Siki, after surviving a gory accident in 2013, now preaches the word of God on buses and in communities in Tema for a living.

The accident, which happened on the Accra-Tema Motorway, renewed Yaw Siki's faith in God.

Before giving his life to Christ, he ruled the airwaves with his 2011 smash hit, 'Wope Dodo'.

“One inch away from death, God gave me a second chance. They said there’s this thing called hallow vest; that vest was screwed to my forehead. It actually touched my scalp and I had to lie on my back for three months,” he recounted in an exclusive interview with MzGee on JoyNews on MultiTV.

Yaw Siki added, “I couldn’t take my bath for three months; they had to do dry cleaning for three months. It wasn’t a pleasant experience and so if today I am here, it’s by His grace; I am saved by grace. I have been given a second chance, forgiven and healed.”

Shortly after giving his life to Christ, he fulfilled God's calling by releasing gospel songs such as ‘Thank You’, ‘Ohene‘ and ‘Medi Wekyi’.

.
Rejected by his friends, Yaw started preaching the word of God. “I was praying last year in December and then the spirit just prophesied through my own self that I should preach in Communities 7, 8, 9 and 10 (all in Tema) this year.”

The former hiplife musician now makes a living from preaching the gospel and the support he receives from his family.

“(With) my bills, my family supports me and then when I preach, people give [me money]. When I preach I do not ask but when I finish some people call me, 'oh take this, take that and all'. With the family's support, I am able to pay bills.

“Last year December, I [preached] at the Motorway Roundabout and a man gave me GH¢500. That’s the highest I have received so far. I preach in the Trotros (commercial buses); I preach in-between lanes in the Communities, and you see that people will not give you that big amount for preaching to them but I don’t mind,” Yaw concluded.

The former gospel musician's toils and journey have caught the eye of Sonnie Badu who says he will like to meet and support him.

Sonnie Badu said in a post on Instagram: “I would like to meet this young man who has moved from being a secular artiste to a preacher on buses. I would like our ministry to sponsor him for the next few years. It will not be easy, with the decision you have made, as there will be long suffering. However, we are [here] to let you know that you made the right decision. #yawsiki ”