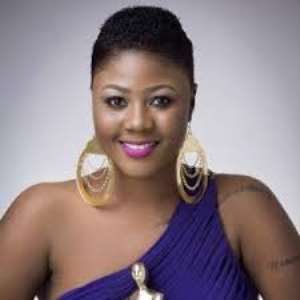 Actress/Chief Executive Officer of Salmum Pictures, Salma Mumin, has revealed that she will accept five million dollars ($5 miillion) offer to act a ‘raw’ sex scene in any movie.

“I WILL CHARGE 5 MILLION DOLLARS FOR A SEX SCENE. I’M NOT TALKING ABOUT CEDIS. SEX SELLS AND PRODUCERS WILL PUSH YOU TO DO ONE OR TWO SCENES FROM TIME TO TIME TO PUSH THEIR MOVIES BUT IF IT DOESN’T MAKE SENSE I WON’T DO IT.”

Making reference to Mexican-Kenyan actress, Lupita Nyong’o, the sassy actress told Eddy Blay on eTV’s Late Nite Celebrity Show that she only not won awards for her nude scenes but made a huge profit from it so she (Salma) is also readily available for such roles.

“I DON’T SEE ANYTHING WRONG WITH SEX SCENES. I KEEP REFERENCING LUPITA WHO WENT NUDE AND GOT REALLY HUGE AND SHE GRABBED AWARDS ALL OVER. IF I’M FEATURING IN A MOVIE AND DOING A NUDE SCENE, IT WILL COST THE PRODUCERS A LOT. I DON’T JUST PLAY THE ROLES FOR NOTHING; IT HAS TO MAKE SENSE BECAUSE IF I’M PLAYING A CHARACTER TO EDUCATE THE YOUTH ABOUT PREMARITAL SEX, I THINK IT’S A GOOD THING. IT HAS TO BE DONE AND DONE BEAUTIFULLY.”

Salma Mumin’s No Man’s Land premiers on February 13 at the Silverbird Cinemas.